Feel free to share your personal review, as well as any thoughts or impressions you have of the first season of Kung Fu Panda: The Paws of Destiny. You're welcome to also vote in the poll below.

*SPOILER WARNING! This thread is for those who have finished all 13 episodes in their entirety. Proceed at your own risk.*

S1E3 - Blade of the Red Phoenix

S1E9 - Out of the Cave and Onto Thin Ice

S1E10 - Return of the Four Constellations

S1E12 - Sacrifice at the Edge of Time

Pretty good, but it didn't live up to all my expectations. Also, I thought it wouldn't come to this, but this series ultimately has to be non-canon, for reasons given in the show.

Can't lie, it was pretty good. I liked the sarcastic humor and sometimes even the dirty jokes (like Li almost saying "ill stick it up your a**), but I feel like there's a little bit of deus ex machina and Mary Poppins in the whole show. There really isn't anything special about the four kids chosen. The constellations said they were chosen because of their moral values, but I believe there values are more intrinsic. Any regular person, who was brought up well, would do the same things the children would do, and so the children's morality is no abberation and not special either.

The graphics and all that were alright... if we're talking about the characters. The settings were kind of similar to the nickeldoeon in terms of quality, but Paws of destiny (ill just call it pod) has more distinguishable settings. Even the cbaracters are off; they look more cartoony and their body shape is weird. The dragon design for both Po and the main villain (forgot his name) was also a dissapointement. Not to be childish or anything, but I hoped the dragon would look more war-like. They're appearances make them look less of a threat, as superficial as it sounds. Also, the Tiger, Pheonix and Turtle looked like remodeled version of past characters. But I don't think the tiger dude looked too much like Tai Lung, the tiger dude had a softer and less villainous face. And the black turtle didn't look entirely like oogway. I just think they were all similar species that's why they all look alike.

The panda girl, the one with the blue dragon (im terrible at names) reminded me of Monica from FRIENDS. So I liked her personality. But other than that, the rest of them have really stereotypical personalities and I wished they'd make them more unique.

I believe that some point in the series, the five will be shown... maybe at the pinnacle of a battle or something. But I feel like their appearances will be strictly temporary. There's too many characters to handle if the five would continue on the season. I'm just worried about the voice actors though. Obviously, they wont ask jacky chan or angelina jolie to be the voice actors, because its gonna be expensive. I just wished they won't hire the same voice actors from LoA because they all butchered and killed the Five's voices (espcially Tigress's (god her voice was annoying and loud)). This is another unfair take for the five. They're always shoved away from glory as it is essential for only Po to be able the one to defeat the villain... literally, they failed with the battle against Tai Lung, they were captured and then nearly killed by Shen ( they should have been killed if it wasnt for Po), and failed during fighting Kai. I just wished that instead of the panda girls, they could have focused on the five. Let's be honest, they aren't the main protagonist but they are good people with good characters and the deserve some sort of movie or series where they can do stuff on their own without the constant help of Po. They're interesting and i love their group dynamic. If they had the series focusing mainly on the five, im pretty sure they gonna get big bucks. The trailer for paws of destiny, under the comment section, there was way too many comments of people expecting thr five. That's what the people want but i guess dreamworks dont care.

I like Jade Tooth's character. She was bound to break, it was foreshadowed heavily (perhaps too heavily) throughout the series. I just wished they made her arc a little more subtle instead of screaming to the audience that she was gonna change sometime later. Her character really reminds me of Tigress, but I don't know how. Maybe that's what shes gonna be like if she turned evil, except prolly scarier and more powerful.

Also, I liked how we could see Po in all sides of the spectrum. I read in a lot of fanfictions where Po is a total angel. He gets sad when someone dies, and then he's still haooy even though all the problems in the world make odds of living against him. But this show showed him being annoyed, frustrated, and most importantly, wrong. It made him more human.

The action scenes? They were fine... it just feels like their is some inconsistencies. That's the problem with powerful characters. They are attacked and then suddenly they all forgo their use of powers. Like Po with those deer people, why can't they all use their hero chi in a more efficient way?

I find the music very annoying, I don't know why. Generally, I don't like old chinese music (im sorry), but at least Hans Zimmer incorporated something special that made me like it. The actual chinese songs (like they sang in chinese) was weird for me. Cause the switching of language is just... 'woah'

Lastly, the villain. The last episode showed that their was a new villain. The whole pattern can get really old, really soon. Like im talking about the type of pattern where one season the protagonist will defeat the villain, and on the the next season, they're going to take on an even stronger villain, and so on. I just wished they'd stick to one villain so that the conflict would feel more real and the stories are more hype. Hopefully, the season two villain has something new to bring to the table instead of just another chi ability. We had kai and the pigeon dragon, give us something else. Maybe the new villain could be a chinese god, or some sort of apex predator wanting supremacy for the other apex species and wants to oppress physcially weak species.

I don't know if the series will last long. I hope it didnt flunk in revenue. In terms of if the show is canon or not, it depends. Yes, the series was a show made by dreamworks, but the director said that all kfp movies have to stand alone. With this in mind, the panda kids from Pod can't possibly have an impacting role in the movies lest people would get confused or the show would have a lot of exposition. I think they could possibly have an appearance in the movie, but possibly only as extras on the background or something like that. So, if you think that the only way for something to be canon is for it to be in the movies, than i think Pod has a chance to be actual canon.

(I mean, look how annoyed he is on this one😂) 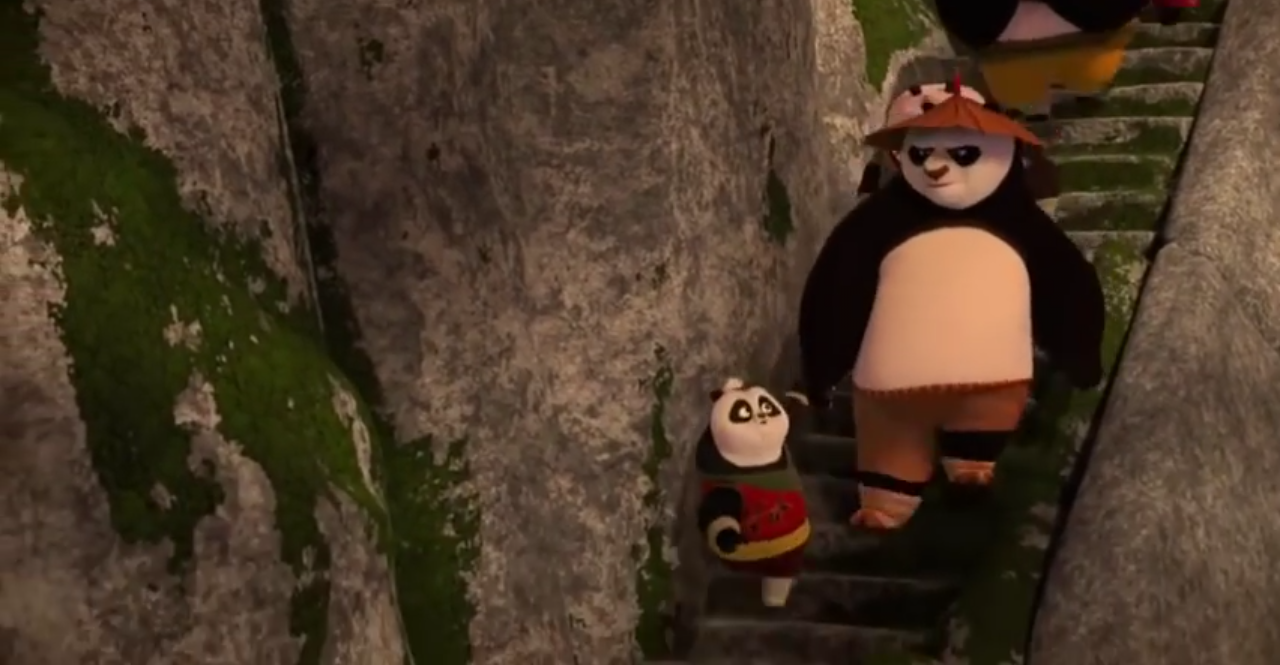 Kung Fu Panda The Paws of Destiny, Okay I have a lot to say about it, when I heard about there would be a new series, I was hyped up, but when it was confirmed it would take place after the 3rd film, I was dissapointed because I wanted to know how Tigress got her yellow outfit and how the Master Garden was built, I wanted the HTTYD Race To The Edge for Kung Fu Panda, but unfortunately no :(

Then the trailer dropped and I was hyped to see the trailer, still dissapointed but I was still looking forward to it, But then I decided "Ya know what I'll make a fan film" and I even decided to explain how Shifu got his Green Robe which wasn't shown in Legends of Awesomeness and how Li survived Shen's massacre.

So then the series came out, I was so worried and excited mainly because of The Furious Five (especially Tigress) however when I started it and as it went on. Not only did it make me done with the franchise, It was a HUGE letdown! What were they thinking of removing The Furious Five and Shifu (I know people didn't like LOA but atleast they were there) But there are some positives

I enjoyed seeing Li again but I thought we would finally find out how he survived the massacre but honestly it felt like they were taking the p*** out of the plot hole in the 3rd film. I did enjoy the characters though

I was glad it had some dark moments, not as dark as Ninjago or How To Train Your Dragon Race To The Edge but still up there and the villain Jindao was absolutely fantastic

Animation was absolutely beautiful for a tv show

But it was such a huge letdown, After waiting 3 years since Legends of Awesomeness ended, waiting for some new Kung Fu Panda show, this was the letdown. With How To Train Your Dragon, everything is explained, we know how Stoick got Skullcrusher, how Dragon Racing was invented etc. Kung Fu Panda is nothing in comparason, We don't know how Shifu got his Green Robe, how Li survived, how the Master Garden was built and how Tigress got her yellow outfit. All which I did in my fan film. Right now I'm even more excited for How To Train Your Dragon 3 The Hidden World, which is gonna be Outstanding!

Kung Fu Panda The Paws of Destiny is decent but a HUGE letdown! I give it 6/10

Hopefully if the Furious Five are in Season 2 it'll be a great show but right now.... what a letdown!

What do you think?