Battle between Po and Shen

Po and Shen facing off shortly before the latter's demise

The battle between Po and Shen was the final confrontation between Po and Lord Shen near the end of Kung Fu Panda 2. It marks as one of three battles involved in the Battle of Gongmen City, taking place in Gongmen Harbor within the city itself.

After destroying Shen's fleet with the new technique he had developed through achieving inner peace, Po boarded the remains of Shen's ship and found the peacock staring at his surroundings in disbelief. Shen asked Po how he had found peace despite all that he had suffered, and Po explained that he let go of his past and chose to be who he was now, and urged Shen to do the same. While he agreed about choosing his own path, Shen refused to let go of his hatred, and proceeded to attack Po with his knives and lance.[1]

Overwhelmed by the peacock's attacks, Po was left solely on the defensive, dodging Shen's swipes and using a piece of wood to shield himself from his throwing knifes. He managed to avoid all the blows, though Shen managed to get close enough at one point to slice off some of his facial fur, but failed to wound him. In his furious assault, Shen failed to realize that he was slicing through the ropes holding up the remains of the ruined cannon towering above them. As the cannon began to topple towards them, Po saw the danger and fled, while Shen accepted his fate, closed his eyes, and was killed when the cannon fell on him. The resulting explosion from the gunpowder flung Po into the water, where he managed to survive the blast.[1]

With Shen's death, Gongmen City was once again under the leadership of the Masters' Council. What became of the remainder of Shen's army is not revealed, though they were likely imprisoned for the crimes they committed while serving him. Meanwhile, having completed their mission, Po, Shifu and the Furious Five returned to the Valley of Peace. 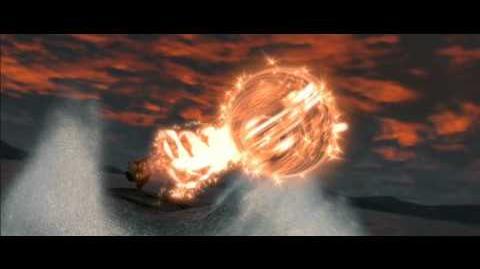 Retrieved from "https://kungfupanda.fandom.com/wiki/Battle_between_Po_and_Shen?oldid=97837"
Community content is available under CC-BY-SA unless otherwise noted.