The Furious Five fighting jombies on a rooftop

Kai utilizing jombies and making his threat known to the Furious Five, Shifu and Po

Li
Mr. Ping
Villagers of the Valley of Peace
Kai

The Furious Five, Shifu and Po stop the invasion, but the jombies are reclaimed and Kai vows to return

The battle between kung fu masters and jade zombies was the invasion of three jade zombies, or jombies, in the Valley of Peace, catching the attention of the masters in the Jade Palace. The jombies were sent by Kai to terrorize the village and let his threat be known to them.[1]

When Kai returns from the Spirit Realm with the chi of every deceased kung fu master, he sets out on a conquest to seize chi from every living master. By doing so, he effectively turns them into jombies. He sends the jaded forms of the late Porcupine and Badger Twins to the Valley.[1]

Upon noticing the jombies, the villagers sound a gong to notify the Furious Five, Po and Shifu from the Jade Palace. They promptly rush down, alongside Li, Po's long-lost father. Mid-battle, Po recognizes them and the masters are quick to realize that these warriors are made from a hard jade-like material, making them impervious to many attacks, and have long been deceased.

Upon seeing these legends, Po idolizes them during his fight and even commissions a sketch of him fighting Porcupine. The latter later knocks him into the panda's room and chokes him, much to Po's delight, and he showcases his action figurine of him during the struggle. Shifu rushes to his aid and warns him to focus.

Porcupine and Po both fall through the floorboards into the kitchen quarters of his father's noodle shop. In the tussle, Po apologizes hastily and reaches out for his father's "good pan" but Mr. Ping swaps it for a ladle. The Badger Twins had also made their way there, with Li and the rest of the masters hot on their heels. However, Li is still cautious and concerned for Po's safety. Tigress, Viper and Po deliver the final blow, the Dumplings of Doom, before subduing the jombies.[1]

Through the eyes of the jombies, Kai speaks to the masters and threatens to take their chi. However, the confused masters end up making a fool out of him and are unaware of who he is. Frustrated, Kai reclaims the jombies by morphing them back into their jade amulet form and they zoom back to his side. The masters later set out to find out who Kai is in the scroll room of the Jade Palace.[1] 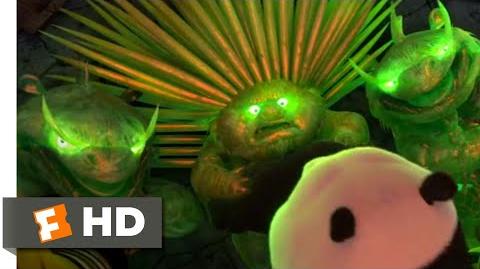 Retrieved from "https://kungfupanda.fandom.com/wiki/Battle_between_kung_fu_masters_and_jade_zombies?oldid=108668"
Community content is available under CC-BY-SA unless otherwise noted.