Vachir and the Anvil guarding the prison doors

Marks the start of the First Valley Crisis

After learning from Oogway that Tai Lung would soon return, Shifu sent a palace goose named Zeng to Chorh-Gom Prison to tell them to double their security and prevent the chances of Tai Lung escaping. The warden, Commander Vachir of the Anvil of Heaven, was outraged when he received the message, as he considered the prison inescapable. In an act of arrogance, Vachir took Zeng on a tour of the prison, at one point even bringing the goose face to face with the immobilized Tai Lung himself. At one point during the tour, Vachir slapped Zeng on the back, knocking off one of his feathers. That feather eventually floated down in front of Tai Lung, who snatched it with his tail, the only part of his body not completely immobilized.[1]

Some time later, Tai Lung proceeded to pick the lock on the shell imprisoning him, using the thin feather and his sharp hearing to detect unlocking sounds within the lock. He succeeded, and the large acupuncture needles inside the stone shell slid out of his back. Tai Lung breathed, finally able to move again, and uncurled his claws. The needles shot out of the shell as Tai Lung began to move his body, and then the shell shattered completely, the pieces flying in all directions.

Up in the highest level in the prison, Zeng and Vachir were alerted to the noise below, and were horrified at what they saw when they looked over the side of the bridge. While the Anvil of Heaven scrambled to try to stop the criminal with everything they had, Tai Lung struggled to his feet, weighed down by the two boulders he was chained to. While Zeng watched the scene unfold with terror, Vachir ordered for the giant crossbows to be fired. The enormous spears fired and embedded themselves in the stone around Tai Lung, missing him by inches as the snow leopard expertly dodged them. When the next spear was fired, Tai Lung used its momentum to smash through the manacle on his right arm. While the rhino guards stared in horror at what their weapon had done, Tai Lung used his free hand to tear off the manacle on his left arm.

Seeing that Tai Lung was free, Zeng attempted to flee the prison and warn Shifu. However, the overconfident Vachir grabbed Zeng by the throat before he could leave, declaring that "You're not going anywhere and neither is he!" Vachir then ordered for the elevator to be brought up, much to the horror of the rhino guards now trapped below. Meanwhile, the rhinos fired one last spear from their crossbow, but Tai Lung redirected the spear and sent it flying back at the crossbow, destroying it. Tai Lung then proceeded to toss up the embedded spears and kick them into the wall high up. Cracking his neck, Tai Lung then used the last embedded spear to catapult himself up to the spears, swinging up them and chasing after the ascending elevator.

Still in Vachir's grasp, Zeng yelled that he was coming their way. Vachir coldly stated that he won't get far, and ordered his archers to fire hundreds of arrows down into the abyss. Seeing the deadly field of arrows flying toward him, Tai Lung quickly swung off the last spear and leaped toward the elevator and hid beneath it, the arrows missing him by milliseconds. One of two rhinos at the elevator's mechanism quickly cut the chain, sending the elevator crashing back down into the abyss. The rhinos had a second of triumph before Tai Lung surprised them, leaping through the hole between them and kicking them away. He then grabbed the chain, jumped over the edge and swung around, launching himself up to the bridge above. Driven by his insatiable fury, Tai Lung proceeded to brutally decimate the guards as he made his way up the levels, even using one of their maces against them.

Tai Lung eventually reached the door level, where a hundred soldiers led by Vachir (still clutching a terrified Zeng) were all that stood in the way of his escape. Vachir growled at Tai Lung, making it clear that he was not scared of the leopard; Tai Lung growled back at the warden who had tormented him for twenty years and prepared himself for battle; Zeng quacked in terror. The goose whimpered that they were "so very, very dead." Vachir laughed, declaring that they were not dead yet, and signaled to a nearby archer, who shot a flaming arrow into the ceiling, setting off the explosives attached to the roof of the prison and causing falling stalactites the size of boulders to smash into the walkway Tai Lung was standing on.

Tai Lung quickly leaped across the rapidly crumbling bridge, but missed the ledge Vachir was standing on by an inch, landing on a tumbling rock. Vachir laughed manically as the leopard fell into the darkness. As he and the rock were falling, Tai Lung spotted the last bundle of explosives in the ceiling that had yet to explode. Thinking quickly, he rapidly leaped from rock to falling rock, eventually reaching the bundle of explosives, pulling it free from the ceiling... and leaped with the explosives in hand towards the army below. Seeing that the last of his defenses was about to be used against him, Vachir finally lost his confidence. Zeng asked, "Can we run now?" to which Vachir whimpered, "Yes," as Tai Lung tossed the explosives at his army.[1]

“Fly back there and tell them... the real Dragon Warrior is coming home.”
—Tai Lung's message

The enormous explosion that ensued blasted open the heavy doors of the prison and sent Vachir and a hundred rhinos flying outside, injured or worse. Only Zeng was relatively unharmed, skidding outside from the blast and coughing out some smoke. In that same moment, Vachir's golden horn piece clattered beside him, signaling the ultimate defeat of the boastful prison warden. Tai Lung suddenly grabbed Zeng by the throat and examined the goose, expressing relief that Shifu had not forgotten him. Smoothing back Zeng's ruffled feathers with a creepy tenderness, Tai Lung told him to fly back to the Jade Palace with a message of his own: "The real Dragon Warrior is coming home." After letting Zeng go, he set out to return to the Jade Palace to exact his revenge on those he felt wronged him and to gain the Dragon Scroll he had been denied so long ago.[1] 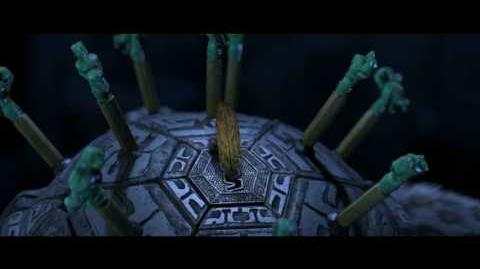 Retrieved from "https://kungfupanda.fandom.com/wiki/Battle_of_Chorh-Gom_Prison?oldid=107663"
Community content is available under CC-BY-SA unless otherwise noted.