Battle of the Fireworks Factory

Shen revealing his role when Po was abandoned

The Fireworks Factory in Gongmen City

Shen and his army are victorious; Po is shot by Shen's cannon, knocked unconscious and sustaining injuries; Furious Five are captured[1]

Tigress: “If all of those weapons leave the building, China will fall.”

Viper: “We bring down the building!”

Mantis: “Hey guys! How about this?”

[He rubs gunpowder together and it ignites in his face.]

Mantis: “Oh! This will work.”
Tigress: “Alright, let's go.”
—Before raiding the factory

Some time after escaping the fallen tower and Shen's wolves, the Furious Five left Po in Gongmen Jail and infiltrated the factory courtyard where they spied dozens of cannons being prepared through the open doors of the building. Viper and Mantis came up with the idea of using the powder kegs the Five were hiding behind to destroy the factory, and so the Five began to set their plan into motion.

However, they were unaware that Po had followed them to the factory in order to confront Shen about his role in the panda's past. In another area outside the building, Po pole-vaulted over the wall and into two wolf sentries. Po quickly knocked the wolves unconscious and used them as a cover to enter the factory, passing a disgruntled Boss Wolf on the way. Once inside, Po stealthily moved along the upper levels of the factory, where he noticed Shen's silhouette in the smoke as he ordered his wolves about. As he approached, however, Shen took Po by surprise, apparently having anticipated his arrival. Po spotted the eye marks on Shen's tail feathers, but managed to resist another flashback and furiously questioned Shen about what happened "that night". Shen replied by implying that Po's parents had abandoned him before slicing through a chain, causing a hanging metal tub to swing into the panda, sending him dangling over the large vat of molten metal.

At that moment, the Five burst into the building with a wheelbarrow full of powder kegs, smashing a lantern over them to light the fuses before dumping the kegs in the middle of the floor. As the Five turned to leave, Tigress spotted Po dangling above them. Realizing that Po would be killed in the explosion, the Five quickly doused the fuses and were immediately set upon by an army of wolves.[1]

Shen: “Are you willing to die to find the truth?”

Meanwhile, Po climbed back onto Shen's platform and launched at the peacock with a flying kick. Shen intercepted by grabbing the panda's foot, and the two briefly scuffled before Po was flung onto a conveyor belt delivering metal into the large vat. As Po was being carried towards the vat, the Furious Five made their way up the platforms, battling an army as they went. As the vastly outnumbered warriors held off the wolves, Tigress scaled up the levels alone in an attempt to reach Po; however, she was soon held up by a large gorilla soldier.

Meanwhile, the conveyor belt moved faster than Po could run, but the panda managed to escape a fiery molten death by stabbing a tuning fork into the bottom of the belt just as he fell over the edge, using a metal wok to shield himself from the searing heat of the liquid metal as he was carried beneath the belt and eventually surprised the peacock as he climbed back up on a large gear. Shen easily outmaneuvered Po and leaped to a higher platform. Po was overwhelmed by a group of wolves before he could pursue but was quickly freed when Tigress kicked a wolf soldier in his direction while fighting the gorilla. Either ignoring or not hearing Tigress when she yelled for him to stop chasing Shen, Po quickly climbed up to the next level and finally caught Shen by flinging the tuning fork and pinning his neck to a large box.

Po declared that Shen could no longer run, and again demanded answers. Shen conceded, removing the fork and taunting him again by telling Po that his parents had never loved him. This again distracted Po, enough for Shen to break open the large box to reveal his most powerful cannon. Po was frozen stiff at the sight of the cannon, but shielded himself with the wok just as Shen fired. The blast sent Po flying past a horrified Tigress and out of the factory, into the river in the distance.[1]

Believing that Po was dead, Shen had the Furious Five recaptured. He did not know that Po had survived the blast, and had floated unconscious down the river until he was discovered by the Soothsayer the following morning.[1] 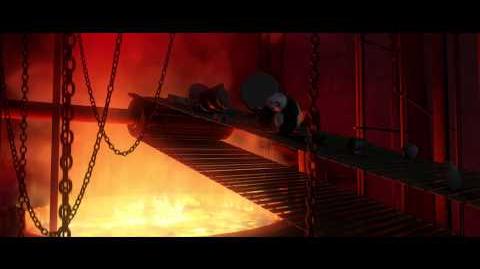 Retrieved from "https://kungfupanda.fandom.com/wiki/Battle_of_the_Fireworks_Factory?oldid=97976"
Community content is available under CC-BY-SA unless otherwise noted.