View source
watch 01:33
Wiki Targeted (Entertainment)
Do you like this video?
Play Sound

This page is about the kung fu master. For other uses, see Bear (disambiguation).

Master Bear's village was attacked by Kai's jombies, so he, along with Masters Croc and Chicken, went to investigate to a deserted riverbed. They were soon joined by Masters Crane and Mantis. The group approached Kai and battled him, but were defeated and had their chi stolen, turning them into jombies.

Later, as a jombie, Bear attacked the panda village, but was held back by Po and the other pandas.

After Kai's defeat, Bear, along with the other masters, were returned to normal.

Master Bear is featured as a playable character.

Not much is known about Bear's personality, but due to his appearance, he must be very wise and powerful, like Shifu.

It is currently unknown what Master Bear's fighting style is, though he is seen wielding a pair of axe-like blades as weapons. He also seems to possess great physical strength due to being one of the largest physical characters, towering over Po. In addition, he has surprising stamina, jumping, and speed comparing to his size and weight - enough to keep up with other kung fu masters while tracking the jombies.[2] 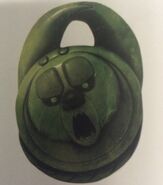