"Challenge Day" is the nineteenth episode from season one of Kung Fu Panda: Legends of Awesomeness.

Po is shocked when Shifu informs him that today is 'Dragon Warrior Challenge Day.' If anyone can defeat Po in battle before sundown, they will become the Dragon Warrior![1]

Po has recently started to become lazy, evidenced when he skips meditation training to tie up a hammock and nap in it, much to Shifu's chagrin when the panda states that his lazing about wouldn't change the fact that he was the Dragon Warrior. Realizing that Po has begun to take his title for granted, Shifu begins thinking of a solution, and finally hits on an idea when Zeng mentions that Po would always be the Dragon Warrior no matter what.

After telling Zeng to send a message down to the village, and sending the Furious Five to the hot springs for the day, Shifu tells Po to go down to the village and get him an apple. Perplexed by the mediocre task, Po goes down to the village, and inexplicably finds himself under attack from the villagers. While hiding, Po encounters Shifu and Zeng, and is stunned when Shifu reveals that today is Dragon Warrior Challenge Day: anyone who can defeat Po before sundown takes his title. With that in mind, Po is faced with the problem of evading and fighting off the hostile villagers (and even his father temporarily) for the rest of the day. When Po rushes off, it is revealed that Challenge Day doesn't exist: Shifu made it up in order to teach Po a lesson. While Zeng has misgivings, Shifu assures him that with the Five gone, there is no one in the Valley powerful enough to defeat Po.

However, in Chorh-Gom Prison, Hundun receives word of Challenge Day from one of the guards. Delighted by the opportunity to get revenge on Po, Hundun manages to knock out the guards and blow up his cell door with one of his new 'horn' gadgets, and then make his escape.

Back in the Valley, Po is still evading the villagers when a rabbit child attempts to attack from above, only for the chimney he is standing on to collapse. Po catches the child as he falls, and to protect him from getting crushed, allows the chimney to fall on him. Though the child is unharmed, Po is left with an injured leg, but the villagers, instead of attacking him again, stand down after seeing once again why Po is the Dragon Warrior. The happy moment is cut short when Hundun arrives. Taking advantage of Po's injury, Hundun defeats Po with little effort.

Triumphant, Hundun then makes his way up to the Jade Palace to proclaim his victory, only for a surprised Shifu to reveal that Challenge Day was made up, and so Hundun is no more the Dragon Warrior than Zeng. At first, Hundun is furious, but then realizes that Shifu is the only one who knows the truth. He proceeds to knock Shifu out with darts shot from his artificial horn, and lock him and Zeng in a nearby closet. He then goes to the village to treat the villagers with disrespect. Po, depressed lies in his own room at the noodle shop and his father tells him he should do something. At first, Po says there's nothing he can do because Hundun is the Dragon Warrior. But then a rabbit, one of Po's fans tries to attack Hundun to become Dragon Warrior.

Hundun obviously stronger than the small rabbit says he will destroy her. Po realizes he can still get back his title but he must hurry to save the rabbit. He attempts to fight Hundun on cruches but fails yet again. The sun sets and Hundun is now officialy the Dragon Warrior. Po gets up and says it's not about the title, but about doing what is right. Although he lost his title, Po comes with focus and defeats Hundun, knocking off his horn in the process.

The villagers cheer on Po, but Po is upset he's not the Dragon Warrior. When he gets back to the Jade Palace, he frees Zeng and Shifu from the box and tells Shifu that he failed since the sun set. Shifu then admitted that Challenge Day was fabricated thus giving Po relief to hear it. As the Five get back, they assume Po must be fast asleep but instead he is training much to their surprise. 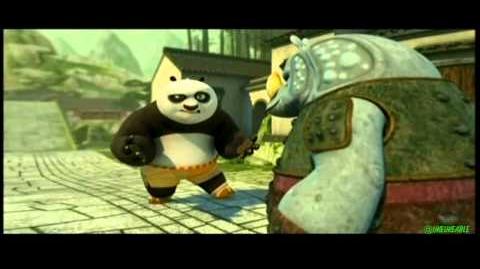 Retrieved from "https://kungfupanda.fandom.com/wiki/Challenge_Day?oldid=100397"
Community content is available under CC-BY-SA unless otherwise noted.