Concept art of Po and Li in the suite

The Chrysanthemum Suite (also called the Forbidden Suite of Untold Luxury) is a luxurious residential building within the Jade Palace grounds. It was originally going to be featured in Kung Fu Panda 3 where Po and his father Li were to play around with one another in the elegant space, but due to story changes, the scene was cut and replaced with the two pandas playing in the Hall of Heroes instead.[1] The suite is briefly mentioned by Po after said scene.[2]

The suite was designed to reflect an elegant lifestyle. Its Chinese-inspired details and textures are adorned with a chrysanthemum floral motif, which Kung Fu Panda 3 art director Max Boas explains was used "not just because of its beauty but also because in ancient China, the chrysanthemum was a symbol of nobility and power."[1]

Po mentions the suite when asked by Shifu if Li wanted to observe Po teaching a kung fu lesson in the Training Hall. Against the idea, after the disastrous results of his prior lesson, Po insists instead that his panda father rest in the suite.

Although the scene in the suite was eventually cut from the film, it was intended that Po and Li would play around in the room together, doing things such as jumping on the bed.[1] 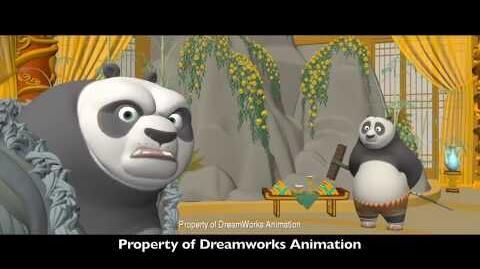 Retrieved from "https://kungfupanda.fandom.com/wiki/Chrysanthemum_Suite?oldid=106952"
Community content is available under CC-BY-SA unless otherwise noted.