Provided a disguise for Po and the Five

Po and the Five

Torn apart by Boss Wolf and his wolf pack

The dragon costume was an object that Po and the Furious Five hid in to sneak into Gongmen City in Kung Fu Panda 2. Po was able to retrieve this item when he accidentally came in contact with a costume stand.

The dragon costume consisted of a long red and yellow body, along with a light green head with yellow horns. The red-rimmed mouth was large and wide in order for the person inside to see. A long red tongue stuck out of the mouth.[1]

Film production designer Raymond Zibach reveals that the costume was designed to be "a bit of a mash-up between a tiger, a dragon, and the legendary qilin." Its designer, the film character designer Nico Marlet, also added googly eyes for a humorous effect, contrasting to its role as a disguise for highly skilled kung fu masters.[2]

After his "stealth mode" failed spectacularly, Po used the costume as a cover in order to sneak through Gongmen City unnoticed. The Furious Five eventually joined him beneath the costume, and they traveled through the city until they came across an innocent sheep being threatened by a wolf soldier. The warriors intervened before the civilian could be harmed by dragging the wolf inside the costume, pummeling him, and tossed him out again. The scene gave the appearance of a dragon eating the wolf and then excreting him out the other end, much to a watching rabbit child's disgust. After the grateful sheep offered help, Po picked her up in the dragon's mouth so they would be unheard, causing the rabbit child to run away screaming.

After she revealed that Masters Storming Ox and Croc were still alive and being kept inside Gongmen Jail, Po and the Five thanked the sheep and continued on. However, Boss Wolf spotted the beaten wolf, and set his soldiers after the dragon costume. Po and the Five struggled to elude their pursuers, "eating" wolves and "excreting" them into other wolves as they went. They were eventually cornered in a small marketplace and surrounded, and the wolves stabbed the costume with their swords. Boss Wolf tossed the costume aside, only to reveal that Po and the Five had disappeared, replaced by impaled crates of cabbages. As Boss Wolf ordered his soldiers to search the area, several Po and the Five sneaked away in barrels around the corner. 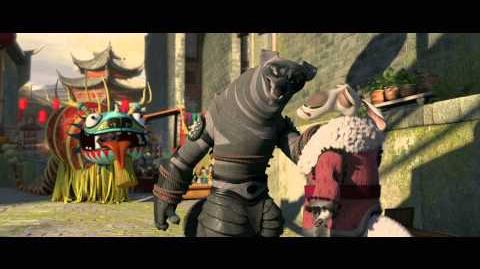 Retrieved from "https://kungfupanda.fandom.com/wiki/Dragon_costume?oldid=90312"
Community content is available under CC-BY-SA unless otherwise noted.