"Enter the Dragon Master" is the first episode from season one of Kung Fu Panda: The Paws of Destiny.[1]

After absorbing the mystical Hero Chi of the Four Constellations, four panda kids enlist the Dragon Master to teach them Kung Fu.[1]

In a dream sequence, Po is confronting a fleet's worth of pirates, when three more versions of himself appear as well. It turns out that all four versions of "Po" are in fact four panda children-Nu Hai, Bao, Jing, and Fan Tong-playing a game. Nu Hai becomes frustrated with her friends, as all of them wanted to play the role of Po. Nu Hai then spots a rare orchid, which she intends to present to Po as a gift when she asks to be taken on as his student.

Eager to reach Panda Village's peach festival before Po arrives, the four ride a rickety old cart down from the cliff atop which they have been playing. Unfortunately, they end up crashing into the village's Sacred Peach Statue, which "Dragon Master" Po is coming to bless at the behest of his father Li. The peach and the cart crash through the village, causing a great deal of damage and havoc, and the peach ends up falling off the cliff atop which the village is built. Po arrives just as this has occurred, and ignores Nu Hai and her friends in order to help repair the damage.

That night, while the panda villagers angrily discuss the actions of the four children, Nu Hai and her brother Bao are reassured-albeit ineffectively-by their Grandma Panda. Looking to make amends for their mistake, they recruit Jing and Fan Tong on a mission to recover the peach statue. Upon finding it, they move it only to discover a hidden cave, which turns out to contain the Temple of the Four Constellations. Bao, goofing around, touches one of the statues, causing all four to release a blinding flash of Chi that enters the four children.

Terrified, the children go running back to the village, unaware that they are being observed by a strange water deer. The children discover that they have been imbued with strange powers, though they manage to conceal this fact from Grandma Panda. Meanwhile, the water deer reports to her superior Jade Tusk and their master Jindiao, and confesses failure to locate the temple first. After having her taken away to be executed, Jindiao orders Jade Tusk to make up for her underling's incompetence.

The following day the children ask Grandma Panda about the Four Constellations, and learn that they were ancient heroes. Having thwarted an evil master's plans to harness the Chi of the Wellspring, they hid it away where only worthy Kung fu masters would find it. The children run to Po, begging him to train them, but he is reluctant to do so until he is accidentally knocked out. He then finds himself in the Spirit Realm, having been summoned there by Oogway, and learns that it is his destiny to train the four young pandas.

Jade Tusk arrives and captures the children, and attempts to force them to open the way to the Wellspring. Fortunately, Po arrives to fight her and her forces, though he is somewhat distracted by the kids' inexperienced attempts to help him. Fortunately, seeing Po at Jade Tusk's mercy allows the children to unlock the full power of the Chi of the Four Constellations, scaring off the villains. Having witnessed the kids' potential, Po welcomes them as his students. 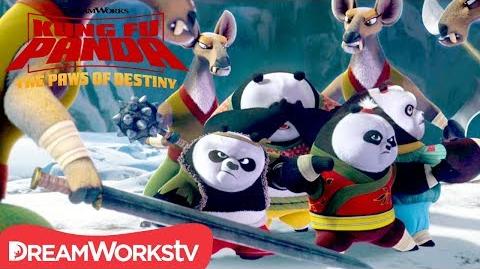 Retrieved from "https://kungfupanda.fandom.com/wiki/Enter_the_Dragon_Master?oldid=105076"
Community content is available under CC-BY-SA unless otherwise noted.