The Five Mystic Kung Fu Secrets are a set of difficult kung fu techniques that each have a mystical aspect to them, hence its name. The keeper of all five secret techniques was Master Yao, who now only keeps four of them, with one in the possession of Bian Zao.[1]

The five mystical techniques are as such:[1] 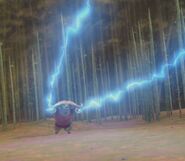