Not to be confused with Wushen, another frog kung fu master featured in Kung Fu Panda: Legends of Awesomeness.

Legend of the Legendary Warrior
Master Frog was a renowned master of kung fu. His statue has been held among with other noble kung fu masters at the Jade Palace's Master Garden.[2]

Frog participated in an annual kung fu tournament at the Jade Palace at one point.[3]

Frog has his own painting within the Hall of Warriors, placed next to Master Bull's. It shows him perched on a lily pad next to a lotus flower in the middle of a small body of water (presumably a pond). A short caption below says, "Beware his Musical Mayhem attack."[4]

Frog could be seen in Lily Pad Marsh sitting on a hand of a Master Monkey statue. When clicked upon, Frog will flicker his tongue, jump from hand to hand, and leap into the pond below, and then float back up to the statue in a bubble.

He also had a scroll named after himself in the game called "Master Frog's Leap". 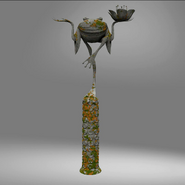 Retrieved from "https://kungfupanda.fandom.com/wiki/Frog?oldid=100606"
Community content is available under CC-BY-SA unless otherwise noted.