Brown pants with a studded brown belt and studded wristbands

"The Princess and the Po"

Fred Tatasciore[1]
Gahri (sometimes spelled and pronounced as Gary) is a minor character in the Nickelodeon television series Kung Fu Panda: Legends of Awesomeness. He is one of the many crocodile bandit followers of Fung.

So far, Gahri has has had only one large role in the series (the episode "The Break Up"), but he is the source of a couple of running gags, such as continuously annoying and questioning Fung, and having his name mispronounced as "Gary". He is the only bandit besides Fung and Wall Eye that has had a speaking role. Over the course of the series his roles have become more pronounced and he has become a bigger character.

Gahri is often shown throughout the series as very clumsy, apologetic, and often says that he has to go to the bathroom. He is seen in "The Break Up" as neat and sensitive. He is also seen as loyal to both Fung and Mr. Ping. He is also shown to be smart.

Though he is not a kung fu warrior, Gahri has reasonable skill in wielding various weapons, especially the axe. Gah-ri also had learned some skills in Kung Fu.

It is shown throughout the series that Fung seems to hate Gahri's bumbling antics and the fact that he has to go pee. Also, he usually mispronounces Gahri's name as "Gary". Once, when Gahri corrected the mispronunciation, Fung actually shoved his subordinate away in frustration. It is stated that Gahri is Fung's second in command. When Fung is not around, Gahri is the one who makes the choices and speaks for him and his fellow bandits. Gahri has left Fung's gang twice so far. He is the only one who stands up to Fung and argues with him.

So far, Gahri's relationship with his fellow bandits is unclear, but it can be assumed that they get along quite well, and are able to work as a team. He is seen as the second in command, as when Fung is not around, they will follow Gahri.

As the Dragon Warrior and Fung's enemy, Po is naturally Gahri's enemy as well, and they have fought each other more than once.  However in the episode "Terror Cotta", Gahri, fed up with Fung's failures, befriended Po and also in "The Break Up", Gahri left Fung's gang and worked for Mr. Ping. During this episode, Po attempted to get Gahri and Fung back together or at least get Gahri away from Mr. Ping because Po became jealous of Gahri's relationship with his father (Mr. Ping) and how well they were getting along together.

Concept illustrations of Gahri and "Dirk"

Concept illustrations of Gahri and Irwin 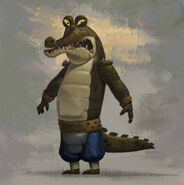 Gahri and Fung frozen in "The Most Dangerous Po"
View more...

Gahri: “Do I have time to pee?”
Fung: “No! [Throws down helmet in frustration, then pauses] Well, if you hurry, just-- [Sighs in frustration] ”
—Before ambushing Po's traveling party, The Princess and the Po

“ [After Tigress knocks away his weapon from his hands] I gotta pee again. [Runs away] ”
—Gahri, The Princess and the Po