Leader of the Lin Kuei

"The Secret Museum of Kung Fu"

Maurice LaMarche
Heilang is a character in the Nickelodeon television series Kung Fu Panda: Legends of Awesomeness. He serves as the leader of the Lin Kuei and made his first appearance as the main antagonist in the episode "The Secret Museum of Kung Fu".

Heilang is seen to be cunning, intelligent and ruthless. In The Secret Museum of Kung Fu episode he declares his intention to rob and burn the Valley of Peace in order to show the villagers that his clan takes control over their territory, he also terrifies the Cranes mother during the Mama Told Me not to Kung Fu episode.

Like his minions, Heilang specializes in weapon-wielding, particularly the chain hammer. He has also been seen wielding a sword. He is a skilled and self-confident warrior, however does not care for honorable combat and willingly uses special items like the Shadow Crown giving him a definite advantage. His activity is result-oriented, so does not seem to have any objcections against withdrawal when the goal is reached or his liberty is at stake.

Heilang is dominant and treats his subordinate wolves with lack of concern - beating them or leaving them at the mercy of The Furious Five after the fight is not a problem for him. 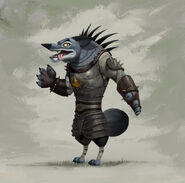 Retrieved from "https://kungfupanda.fandom.com/wiki/Heilang?oldid=113973"
Community content is available under CC-BY-SA unless otherwise noted.