Green and red shirt with a brown belt

The Anvil of Heaven (formerly)

Hundun (pronounced "hoon-DOON") is a character from the Nickelodeon television series Kung Fu Panda: Legends of Awesomeness. He is a former member of the Anvil of Heaven who worked as a guard at Chorh-Gom Prison. He lost his job after the defeat of Tai Lung and blamed his troubles on the Dragon Warrior. He made his first appearance in "Rhino's Revenge", where he unknowingly met Po and befriended him; but after learning who he was, he fought the panda and lost, ending up back in Chorh-Gom as a prisoner himself. He continues to frequently appear in the series as a vengeance-seeking villain.

Originally a member of the Anvil of Heaven at Chorh-Gom Prison, Hundun was among the guards that tried to prevent Tai Lung's escape, but failed. He lost his job at the prison after Tai Lung's defeat, which (without its main prisoner) lost purpose and closed down.

With this, he blamed his troubles on the Dragon Warrior (Po), leading him to develop a bad temper and self-pity, his family leaving him, and additionally losing his house, his friends, and a pair of shoes.

Hundun first appeared in the episode "Rhino's Revenge", where he was found sulking outside the noodle shop entryway, scaring away Mr. Ping's customers. Hundun was first confronted by Po during Dragon Warrior Day, and after hearing Hundun's story of how the Dragon Warrior was to blame for all his troubles, Po felt sympathy for the rhino and decided help Hundun get back on his feet. He helped him get a job and trained Hundun in Kung Fu, teaching him to develop self-control and gain self confidence. During this, Po inadvertently revealed both his and the Furious Five's weaknesses. After completing his training, Hundun thanked Po as a friend, but soon revealed to the panda that he had plans to use his new found skills to destroy the Dragon Warrior.

Later, he found out that Po was the Dragon Warrior after coming across multiple Dragon Warrior displays throughout the village which resembled Po's likeness. Hundun immediately turned on Po and sought vengeance, even drawing Po into fighting him by threatening Po's father. Po saved Mr. Ping, but later failed in his battle with Hundun after the rhino took defeated the Furious Five, and then took advantage of Po's kindness by pretending to be sorry for his actions, calling Po's true weakness his heart. Po rose and discovered how to fight back against Hundun, with the rhino eventually becoming trapped under a statue and his horn breaking. In the end, Chorh-Gom Prison reopened, this time with Hundun himself serving as a prisoner.

In the episode "The Kung Fu Kid", Hundun reappeared as a cameo in Po's nightmare, where he tried to defeat the Furious Five with Scorpion, Taotie, and Fung, and was defeated by Peng instead of Po.

In the episode "Challenge Day", Hundun overheard one of the guards talk about Challenge Day, on which anyone who defeated the Dragon Warrior before sunset would become the new Dragon Warrior. Hundun then escaped his cell using a homemade horn-grenade, and after arriving in the Valley of Peace, he confronted Po, challenging him to a fight for the Dragon Warrior title. Hundun was able to defeat Po easily as the panda's leg had been injured in a previous ordeal where Po rescued a child from a fallen chimney. After defeating Po, Hundun made his way to the Jade Palace to claim his new title, only to learn from Shifu that there was no Challenge Day, as he had made it up.

Then learning that none of the villagers knew the truth, Hundun decided to take advantage of the situation and captured Shifu, locking him and Zeng in a cabinet. Hundun then proceeded to bully the villagers, until Po returned to retake his title. While fighting, Po realized that he didn't need the title and that stopping Hundun was what mattered most, and used a hammock to slingshot Hundun out of the Valley of Peace, beating the rhino once again.

In "Royal Pain" Meng Tao freed Hundun from Chorh-Gom Prison to help him make Lu Kang fail in exchange for his freedom. Although Hundun managed to incapacitate Po, he and Meng Tao were defeated by Lu Kang and were remanded to Chorh-Gom Prison.

In "The Most Dangerous Po" Hundun approaches General Tsin's property looking for a bakery (which General Tsin lured him here). It is also revealed that Hundun likes plum pie. General Tsin mentions to Po that he was hunting Hundun after luring him with a coupon for a bakery sale. Po fights Hundun (who thinks that Po is after his pie) while trying to secretly warn Hundun that General Tsin is hunting him. General Tsin then enters the battle and defeats him. Hundun is then subjected to the stiffening Zu Chao powder like the rest of the villains he had hunted. He is later rescued by Po, but escapes upon being repelled by Po. Hundun tells Po that this isn't over.

In "War of the Noodles" Hundun opens a rival noodle shop with firework shows by using the recipes that Po taught him while in prison. At first Po is suspicious especially when he see's Hundun's waiters but soon believes that Hundun has changed. When Mr. Ping finds out he goes over there to try to prove that Hundun is up to something. Mr. Ping goes over there and stills a recipe for bean buns. Then remembers that there is a secret tunnel under Hundun's noodle shop that leads to the Jade Palace. Po sneaks over there and beats up the waiters. Hundun shows Po that the tunnel was filled by the previous owners. Later Po returns and promises to help Hundun with his business. When Mr. Ping finds out he is upset and gives up competing against Hundun. When Mr. Ping goes over to the resturant he sees that the dirt from the tunnel was removed. He is then captured by Hundun and tied up. Hundun reveals his plan to blow up the Jade Palace with the fireworks. Po steps in and stops the explosion. Then rides a firework down the tunnel which sends Hundun into the sky. Hundun is taken back to prison with his waiters.

Hundun has a vengeful, temperamental personality backed up by a tendency towards blaming his problems on others rather than himself. Since his life took a downward spiral, he blamed his misfortunes on the Dragon Warrior for defeating Tai Lung and indirectly bringing about the close of Chorh-Ghom by taking away its only inmate, leaving him without a job. After this, he fell into bitterness and self-pity. And this fall led his wife to leave him.

While he's capable of making friends, Hundun will immediately turn on them if he feels that they've wronged him and won't hesitate to harm them. He feels no qualm about threatening the safety of others close to the target of his anger, as demonstrated when he took Mr. Ping hostage to make Po fight him. He also has an unusual way with words, describing things rather poetically and dramatically while tending to use many tautologies, often repeating words in the same sentence.

Hundun received training in Kung Fu from Po himself, quickly becoming skilled enough to defeat the Furious Five almost instantly in battle after exploiting their weaknesses). He is able to perform a move as elaborate as the Swirling Lynx Round Kick repeatedly without tiring.

He is also very mechanically proficient, using his time in Chorh-Gom Prison to build a number of prosthetic horns to replace the one he lost fighting Po. These horns can contain a number of devices, including an explosive, a four-barreled dart gun loaded with tranquilizers and explosive fiery blasts thanks to the exploding fire gems, and a sword.

On a side note, he is a very good cook, as shown in the episode "War of Noodles".

The Anvil of Heaven

Hundun was a faithful guard, like the others at Chor-Gom, making sure Tai Lung did not escape.

Hundun blamed the Dragon Warrior for all of the problems that resulted in the closing of Chorh-Gom Prison, and the loss of his job there due to Dragon Warrior's defeat of its one prisoner. When Po learned of Hundun's past misfortunes, he gave him a job, a place to stay, and Kung Fu lessons on how to develop self-control and build self-confidence. Through all of this, Hundun developed a friendship with Po, not knowing that the panda himself was the Dragon Warrior, whom he wanted to destroy.

When told the truth, however, Hundun's wrath was only strengthened. During his fight with Po, he did not hesitate to use their former friendship and Po's kind nature in order to win, and sucker-punched him after he deceptively pleaded for forgiveness, and even threatened Po's father. He also took advantage of Po revealing his and the Furious Five's battle weaknesses during his training with them. Though Po showed mercy to Hundun, even saving him from being crushed by a giant falling statue, Hundun thoughtlessly pushed him away in anger, not wanting his help. Though Hundun was imprisoned in Chorh-Gom Prison for a time, he broke out and still seeks revenge against Po.

Hundun wears the common uniform of a guard of Chorh-Gom Prison, comprised of studded green body armor, red metal plates on his waist, a studded belt, and studded protective bands on his shoulders and wrists. 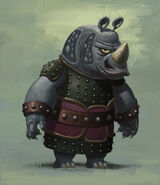 Po's hallucination of Hundun in "The Most Dangerous Po"

Hundun frozen in "The Most Dangerous Po"
Add a file to this gallery
View more...

“I am the Dragon Warrior!”
—Hundun, Challenge Day

Retrieved from "https://kungfupanda.fandom.com/wiki/Hundun?oldid=113714"
Community content is available under CC-BY-SA unless otherwise noted.