In With the Old

In With the Old

"In With the Old" is the twenty-first episode from season one of Kung Fu Panda: Legends of Awesomeness.

When the Furious Five go out of town and the Jade Palace is attacked, Po has to rely on a team of elderly mahjong players for back-up.[1]

Po is excited for a Levitation kung fu demonstration. He and the Furious Five are packed for the demonstration, but Mr. Ping interrupts with urgent matters for Po. Soon, they all leave the barracks, but their departure leaves the Jade Palace undefended as Temutai plans to steal the Helmet of the Invincible Thunder Kick.

At the Noodle Shop Po finds Mr. Ping and two elders, one a pig and the other a goat, playing a game of mahjong. The panda has no choice but to participate and the elders are very slow when making a move.

The Qidan arrive at the undefended palace and try to get Shifu to tell Temutai where the Invincible Thunder Kick helmet is. He refuses, and he fights the warriors. Though Shifu puts up great resistance, he is trapped in a Qidan bell trap. Temutai demands to know where the helmet is, but Shifu continues to resist.

Back at the Noodle Shop, Po tries to speed up the game by cheating, but Mr. Ping catches him. Po runs off to watch the Levitation kung fu demonstration, but soon hears Shifu in distress. He arrives, but is flung out of the palace by the Qidan warriors, and falls all the way back to the Noodle Shop. Po tries to warn Mr. Ping and the goose recommends Gow of the Hundred Stars and Yeung the Musical Archer. Years ago, the duo fought against almost three thousand scorpions and won. The elderly goat is Gow and the elderly pig is Yeung. Po judged both the kung fu masters in disbelief due to their old age, finding a hard time believing his dad, but expressed his admiration for them nonetheless. Mr. Ping insisted in coming along as well but Po disagreed, fearing all three of them would get hurt, and walked away.

Po sneaked to the entrance of the Jade Palace and hurried towards Shifu, who ordered him to stop worrying and rush to Temutai before he got a hold of the powerful helmet. Po got moving but came back to ask if they had a dungeon and became surrounded by Qidan warriors. He soon got overwhelmed and the warriors held him to the ground a few stairs off the Jade Palace's entrance. Then all of a sudden Yeung, Gow and Mr. Ping arrived. One of the warriors got overconfident and mocked Gow, asking what she would fight him with. She got a denture out of her pouch and the warrior laughed, when all of a sudden Gow threw it and it latched onto his face and knocked him back. The warriors became alert and Gow began throwing multiple dentures as she spun rapidly, knocking back several of the Qidan. Po got impressed and asked them to cover him while he went inside and stopped Temutai. He ran inside while Gow threw dentures and kicked, and Yeung sprung bamboo sticks from his erhu and punched, defeating all the warriors who came at them.

After getting inside Po ran downstairs, four doors past the dungeon and faced Temutai in a corridor. They both went for the door and reached a room full of helmets. After trying various helmets, each wielding different powers, Po realized the helmet they were looking for was the simplest one, with barely any ornaments. While putting it on Temutai knocked him back and grabbed the helmet, wore it and wrecked havoc upon the room while trying to hit Po. Po got stuck and Temutai saw his opportunity, but he managed to flung the Your Own Worst Enemy Helmet onto the Helmet of the Invincible Thunder Kick, which made Temutai kick himself and in a shock explosion get knocked back, going through a wall and falling out of the Jade Palace. Po put on the helmet, got back to Shifu and kicked the Qidan bell trap, destroying it and releasing his master.

Po returned to the Noodle Shop and apologized to both his dad and the old kung fu masters, realizing that what he said was wrong and that he shouldn't have been too quick to judge them. They accepted Po's apology and invited him back to play mahjong. Po sat down and told them to take their time with their moves. The Five enthusiastically levitated above them with their new kung fu technique, inviting Po to try it. Mr. Ping asked Po if he would rather go learn Levitating kung fu with his friends but Po chose to keep playing mahjong with them.

A helmet room in the Jade Palace

Shifu defends the Jade Palace from Temutai and his warriors 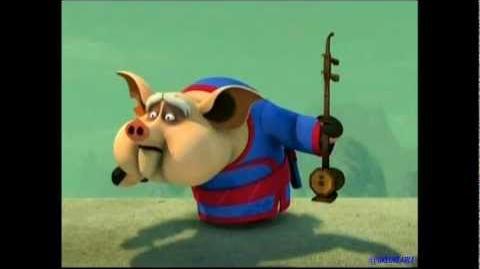