Kung Fu Panda: Art of Balance (also shortened Art of Balance) is a comic book prequel released by Ape Entertainment that contains four stories which take place some time before the events of Kung Fu Panda 2. It was released on April 26, 2011.[1]

Finding it difficult to balance his new role as Dragon Warrior with his responsibilities as a son, Po is relieved when his Dad gets some extra help at Dragon Warrior Noodles & Tofu. When Mr. Ping is taken hostage, can Po save him, or will the restaurant soon be under new management?[1]

This book is separated into four different stories:

The Art of Balance

Po dreamed he was fighting alongside the Furious Five, but the battle was interrupted by the appearance of a shadowy warrior wearing a hat and red robe, who attacked Po. Po was shocked to see that the warrior was himself, and woke with his face in a bowl of noodles, much to the dismay of a rabbit customer. Po later explained his tiredness to his father, saying he had yet to adjust to the fast-paced life that included both his kung fu duties and his job at the Noodle Shop. His lack of focus was also relevant when he was training with a dummy with Master Shifu and got hit.

That night when Po was on his way to the noodle shop, disconcerted to see it was packed, he met an antelope chef named Kuo, who told him he was a huge fan of his father's cooking skills, and offered his services. Po hired him, relieved to have some extra help. Mr. Ping was impressed with Kuo's chopping proficiency when he demonstrated his skills, but declined in revealing his culinary secrets to him when asked.

Afterward, Po was told a story by Shifu, who shared with him his own past experience in trying to juggle responsibilities. He introduced Po to "hing kung", a discipline of balance and weightlessness, and Po attempted to learn, feeling troubled about his dream and about hiring Kuo to lighten his own burdens. He ran through a set of exercises that involved walking over vases and delicate sticks without breaking them. Meanwhile, back at the noodle shop, Mr. Ping found Kuo searching the place, and when asked, he refused to tell him the secret location of his recipes. Kuo became angry and threatened him with a knife.

Later that evening, Po returned and found his father bound, while Kuo demanded to be given Mr. Ping's recipes, telling Po that his father's successful business was to blame for the failure of his own previous restaurants. Po told Kuo that he let his misfortune imbalance him and control his decisions, to which Kuo pitched his knives at the panda. Po, using what he learned in his training, leaped and walked upon the flung knives with ease, and delivered a kick to Kuo.

Shifu appeared and prevented the antelope from escaping, and then congratulated Po on achieving both internal and external balance. He then informed Po about a crisis elsewhere, and Mr. Ping insisted that he go, telling Po not to worry about the mess, as cleaning up would give him a chance to make some changes he'd been meaning to make to the shop. After Po left, the goose then inquired Shifu if he had any interest in working at a restaurant, with the red panda replying that he had none whatsoever.

One Set of Horns

Po tells the story of how Master Storming Ox battled a swarm of two-hundred rat bandits in the rice fields of the Wing Cho province. Master Ox had been trying to save crops after a storm flooded the field, when a group of rat bandits attacked him during his lunch break. He fought back using his strength and skill, but the bandits grew in number, and then formed a huge army, latching arms so as not to sink into the mire. This tactic impressed Master Ox, and he welcomed the challenge, fighting both the two-hundred bandits and the rice fields drowning him.

Before becoming overwhelmed, he unleashed a great display of his brawn and forced the rats away with his powerful horns. He continued to fight off the bandits, and then revealed his own cunning by using the length of his horns and his speed as leverage to keep from sinking. He charged, sending the rats flying off into the skies. With the fight over, Master Ox notices the time and sees his lunch break is over, and continues his work in the fields. The battle becomes known as the "most epically awesome of lunch breaks of all time".

When Mr. Ping came down with a case of "goose flu" and his secret ingredient soup is unable to cure him, he called on Po to fill in for him, calling him the "Dragon Chef" to try and make the work seem cooler. Po enlisted the Furious Five to help him run the shop just as the lunch crowd started to arrive. Though the masters were at first unsure if they could handle such a task, Tigress gave a stirring speech, certain that their kung fu skills were up to the challenge. However, despite their best efforts, the Five only succeeded in making a mess of the restaurant, the customers, and themselves. Mr. Ping arrived (his soup having taken a little longer to cure him), and he quickly took care of all the customers. Deeply impressed, the Five bowed in respect to Mr. Ping and Tigress declares that he is, indeed, the "Dragon Chef."

Crane was seen flying through a forest, looking as though he is being chased. He descended to the ground on a hollow log. Suddenly, Viper emerged from inside the log and leaped at him. Viper then slithered off, but then Monkey jumped down from a tree, taking her by surprise. Soon after, however, he was distracted and discovered Mantis on his back. Mantis soared away on a leaf, and then got a shock as Po almost landed on him. Po then leaped down onto a river bank and was attacked by Tigress, and she and Po battled. Finally, she knocked over Po and tagged him, revealing that Po and the Five were playing a game of elimination tag. Tigress was declared the winner, and everyone arrived on the scene as Po offered that they choose another game. 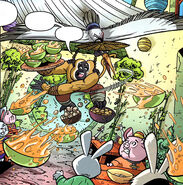