Kung Fu Panda: Tales of Po is an online action game based on the Kung Fu Panda franchise. It is available to play for free on the Nickelodeon Kung Fu Panda: Legends of Awesomeness site. The game features Po as he teams up with members of the Furious Five to defeat various enemies.[1]

Follow the epic adventures of Po as he relives the tales of the mighty DRAGON WARRIOR![1]

The game focuses on Po, who the player controls in the beginning. In later updates, five other playable characters were introduced: Tigress, Monkey, Mantis, Viper, and Crane. The player also gets to select a computer-controlled partner, who may be Po or any of the Furious Five, just so long as the player isn't controlling one of them already. The game has the player walking along a path, toward a boss battle, and always toward the right side of the screen. Periodically, enemies will walk in from the edge of the screen and the game will not progress until they have been defeated. Once all the enemies have been conquered, the final villain may be challenged. Bosses are always fought alone; no partner will help.

After vanquishing a certain number of enemies, the player will level up. Different characters level up separately, and thus may be at different levels. After every level-up, a point is gained to be spent in the training temple to upgrade one of the player's stats: health, kung fu, chi, and speed. Coins may also be collected throughout the levels and be used to buy secret scrolls that have a variety of uses: unlocking new moves, strengthening teammates, and increasing chances of an enemy dropping a pickup. Bowls of noodles in varying sizes appear in the levels to replenish health; the bigger the bowl, the greater the effect. Rare golden noodle bowls will replenish the partner's health fully, even if they have been knocked out.

Three main types of moves may be used: fast attacks, strong attacks, and chi attacks. Chi attacks alone can work from a distance, but they rapidly deplete chi power. The player may also drop into a defensive pose to block some damage.

The game features a wide variety of enemies, each with their own sets of unique abilities to counter Po and the Furious Five. Each level has three different enemy types unique to that level alone, apart from Level 11, which includes all enemies from the previous ten levels.

The game offers a small list of achievements, which are as follows: 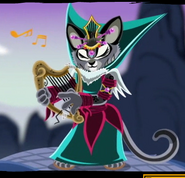