Back to page
View source

Kung Fu Panda:
The Board Game

Kung Fu Panda: The Board Game is an upcoming board game based on the Kung Fu Panda franchise. It is currently scheduled to launch on Kickstarter on June 14, 2018, and then in a full release in Spring 2019.[1]

Modiphius Entertainment is creating an awesome co-operative board game where you get to play as one of the Furious Five or Dragon Warrior Po. Explore the game's different challenges as you come up against Ox Grunts, Wolf Slashers & Spearmen, the Wolf Boss as well as Tai Lung himself. ... All featured as cool plastic miniatures with double-sided tiles representing classic locations from the Valley of Peace! The game uses the Furious Action Dice which show various faces: a Kick, a Punch, two Moves, a Chi and a Claw. Players frantically roll four dice, to get different combos to move around the board, attack enemies, and complete exciting objectives before the sand timer runs out. Watch out for the Claws, as they move the Dial of Destiny triggering your enemies to spawn and attack![1]

Letting you step in to the action as either Po or one of the Furious Five, the boardgame will feature intense dice rolling action, as the players co-operate to defeat Tai Lung and other villains from the Kung Fu Panda films and animated series. Each of the heroes; Po, Tigress, Monkey, Mantis, Crane and Viper will be represented by awesome miniatures and have a growing arsenal of martial arts as they progress through a series of exotic adventures. By defeating villains, completing quests and helping others, players will gain Kharma to upgrade their characters abilities and secure the use of legendary artifacts from Master Shifu with which to face yet deadlier perils.[2] 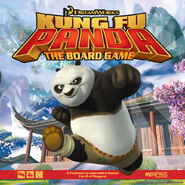 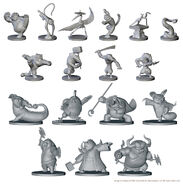