Pink Kimono And Purple skirt with flowers and paws

Wears a pink flower as an accessory

Liam Knight[1]
Lei Lei is a young resident of the secret panda village in Kung Fu Panda 3. She is voiced by Liam Knight.

Lei Lei is a very adorable, kind, sweet, and lovable baby panda. She tends to cry when she wants something but can't have it. However, she is a generally a happy, easygoing, playful little panda. She is usually shown throughout the film playing with her Tigress action figure (formerly Po's), dancing, or just having fun and is usually smiling and laughing. When she likes someone, she has the tendency to follow them around. She is very sweet, pouring tea for Tigress and making her a flower necklace. She is also oblivious to danger, moving towards Tigress as she was fighting jade zombies and seems fairly brave, hitting the jade zombie with her Tigress action figure though she was frightened by Kai.

“You look just like me, but a baby.”
—Po upon meeting Lei Lei, Kung Fu Panda 3

The two did not interact much throughout the film, but do seem fond of each other. When Po first met her, Lei Lei developed an instant liking for his Tigress action figure and wanted it. While Po was initially hesitant and protective of it, upon seeing her sad face, he consented and allowed her to keep it. He then commented that she looked like him but a baby.

He was later shown dancing with her in the village.

Lei Lei is seen in all of her promo images carrying around a Tigress action figure. She has also been noted to be someone that Tigress "can't resist."[2]

She was immediately taken with the Tigress action figure Po had and he let her keep it. When Tigress first stepped into the village, Lei Lei instantly liked her and rushed to hug her, to Tigress's confusion. She continued to follow Tigress around as Po set up a plan to train the pandas to fight the jade zombies or "jombies" despite Tigress being annoyed. Over time, she grew fond of Lei Lei and even wore the flower necklace she made for her and had tea with her. When the jombies attacked, she protected Lei Lei who was still chasing after Tigress. Despite the differences, Tigress is very fond of Lei Lei and vice versa.

Immediately after seeing Mantis at the end of the film, Lei Lei also becomes attached to him, calling him green baby and playing with him like an action figure, much to his annoyance as he frequently tries to explain to her he isn't a toy and calls for help. However, despite having the strength to get out of her grasp, he doesn't escape most likely since he doesn't want to hurt her by using his full strength to free himself.

Lei Lei adorns a pink vest with golden trimmings. The vest is decorated with light pink lotus petals and smaller yellow petals. A belt-like rope holds it to her. Her skirt is dark purple with diamond patterns. She wears a pink flower as an accessory. 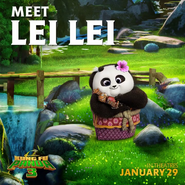 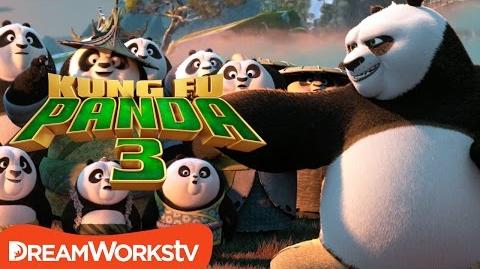 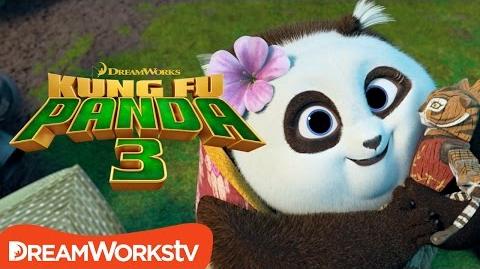