Jim Cummings[1]
Lidong is a character in the Nickelodeon television series Kung Fu Panda: Legends of Awesomeness. He is the younger, but physically larger cousin of Fung. He first appeared in the episode "Kung Fu Day Care", where he helped Fung and the Croc Bandits in their efforts to kidnap Zan from Po and the Furious Five.

Lidong was significantly smaller than other crocodiles when he was young, and was always picked on for it. Later in his childhood, he went through a transformational growth spurt and became significantly larger than the other crocodiles, earning him the respect he wanted from his peers. Because of his experience with being bullied about his size, he had since made an effort to protect his title as the biggest, wanting no one to be bigger than him.[2]

Lidong made his first appearance in the episode "Kung Fu Day Care". He assisted Fung and his bandits in kidnapping Zan for a ransom, but Lidong soon betrayed them when he felt that Fung and his gang were useless. He kept Zan to himself until he was defeated by Tigress.

In "Huge", he helped Fung and his bandits rob Ying the grocer and defeat Po and Mantis. Later, when Fung and the others stole the Gong Tau Potion to make them all gigantic, Lidong stopped them from drinking it, declaring he didn't want others to be bigger than him. He soon drank the potion and fought Mantis at the village, where he got the upper hand. But Mantis soon turned back to normal after he took a sip of the antidote and entered Lidong's giant body to attack him from the inside, defeating Lidong and shrinking him in the process when Mantis emptied the rest of the potion into his stomach. Sadly for Lidong, he did not return to his normal size but instead became even smaller than his fellow Croc bandits. It is unknown what happened to Lidong after this, but it can be assumed that he presumably was sent back to Chor-Gom Prison. And it's also unknown if Lidong ever returned to his normal size, since he was never seen again after this episode.

Despite being somewhat slow-witted, Lidong appears to be much more openly malicious than his cousin. In "Kung Fu Day Care", he was apparently willing to kill Zan if he couldn't get the ransom for him.[3] He also knocked out Fung and his bandits when he felt they weren't competent enough. Incredibly proud of his size and strength, the idea of anyone becoming larger than him is enough to make him react violently. When Po was punching Lidong, he didn't feel anything due to his enormous size, but while he kept trying to hurt him, Lidong took a liking to Po's paws, in which he claimed they were soft, since Po tells him he moisturized.

While Lidong didn't have a true fighting style, he relied on his massive size and strength to overpower his opponents, once even fighting Tigress to a standstill as referenced by Po.

By drinking the Gung-Tao potion, his size multiplied and he literally became an even bigger threat. But Mantis was able to defeat him by jumping into his mouth and started to attack his insides, and then pouring the antidote into him, causing him to shrink until he was relatively tiny, thus, harmless.

Lidong's relationship with Fung is mostly unknown. However, in their early years, Fung used to babysit him. Fung noted how Lidong was annoying at that age until he aged and became more fierce, wanting to do bandit stuff. At the end of "Kung Fu Day Care", Lidong stopped liking Fung, thinking he was worthless. But later on in the season two finale, he worked with his cousin again even after his last interaction with him which began at the production of season two which was when Lidong first appeared. They worked together to rob Ying the Grocer. Later on, when Lidong realizes Fung and his Croc Bandits were planning to steal magic potion that can make anyone who drinks it grow enormous, he stole it from them. After his cousin and the Croc Bandits ran away because of Mantis' new enormous size, Lidong was the only one who stayed behind. After these events, it is not stated what became of the two as Lidong was left behind because he couldn't allow anyone else to get bigger than him. But if he knew, it's obvious that since Fung made no mention or reference to his cousin, he had not heard from him since he didn't talk about him in Season 3.

Tigress obviously saw him as a great threat because he was willing to kill Zan by dropping him to his death, which made Tigress very angry. After she saved Zan from him, she kicked him in the face and he landed on the ground hard, though he did survive, due to his bulky appearance. In his two other appearances, she doesn't seem to notice. But in Huge, she commented on how formidable his size is and that Mantis didn't stand a chance against him.

At some certain point unknown, Po knew who Lidong was, probably during some time during the events that occurred after his first appearance. He has fought Po many times. In Huge, Po comments on how Lidong gr bigger the last time he fought him.

Mantis seems to be his greatest enemy yet since he was the one to cause him to act violently the most. He also caused his shrunken appearance. 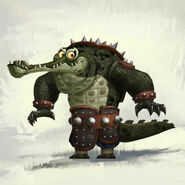 Lidong after his growth spurt
Add a file to this gallery
View more...

“Give me that kid! You guys are pathetic.”
—Lidong to Fung and Gahri after fleeing from Tigress, Kung Fu Day Care

Retrieved from "https://kungfupanda.fandom.com/wiki/Lidong?oldid=101958"
Community content is available under CC-BY-SA unless otherwise noted.