"Love Stings" is the twenty-third episode from season one of Kung Fu Panda: Legends of Awesomeness.

Po tries to get his father a girlfriend, but changes his mind when Mr. Ping reveals he already has a girlfriend. Unfortunately, she isn't exactly Po's favorite person.[1]

While entering the noodle shop, Po dropped some equipment and ingredients for his father, who wanted him to stay and help make mooncakes and dress up as the traditional clown for the Autumn Festival. Po, however, declined, saying he was too busy with his Dragon Warrior duties, which disappointed Mr. Ping. Po later went to the Training Hall where he and Monkey spun around in the Jade Tortoise of Wisdom like a thrill ride, after which trying to train in "dizzy kung fu".

This was interrupted when Po realized Mr. Ping was present, having witnessed their behavior, and the goose angrily left, hurt that his son had made excuses to have carefree fun instead of helping him. Monkey suggested to Po, who felt guilty, to get his father something to keep him busy since Po no longer was around as much. Po decided to get his father a girlfriend to keep him company, and he put up flyers for potential dates for Mr. Ping.

Though a number of ladies showed up, Mr. Ping acted rude towards them, even getting slapped in the face, until eventually he admitted to Po that he turned them away because he already had a girlfriend. Po was happy to hear this, but was distracted when he noticed the pots moving in the kitchen, only to reveal Scorpion behind them.

Po tried to attack her, having remembered his last encounter with her when she had tried to kill him by hypnotizing Monkey, but Scorpion explained that she had turned over a new leaf since then, and she asked him to stay for dinner. Po, shocked and repulsed, stayed to hear how this had happened. After making accusing remarks about Scorpion and being reproached by his father, Po eventually calmed down, and, reluctantly, came to accept their decision to be together. He left, promising not to tell Shifu or the Furious Five about Scorpion or their relationship.

Back at the Jade Palace, Po worked out his frustration on a training dummy, and seeing this, the Furious Five suggested he give his father's new girlfriend a chance. Po returned to the shop to see that Scorpion was alone, Mr. Ping being out on delivery, and the shop was full of mooncakes ready for the festival. Scorpion kindly offered Po a fresh batch of mooncakes, to which Po accepted thankfully, however, after he swallowed, Scorpion revealed that the mooncakes were poisonous. Po was made weak and dizzy from the poison, unable to fight back as Scorpion hid him in a cellar, further revealing her plan to poison the entire Valley of Peace and have her revenge.

When Mr. Ping returned, Scorpion told him that Po had said he no longer wanted to see him, which upset the goose. The two went to the Autumn Festival. Po, struggling with the effects of the mooncake, slowly managed to escape. At the festival, everyone was ready to eat the mooncakes, and Po arrived to try to stop them, but was still too dizzy and unstable. Everyone ate their mooncakes and then soon fainted, save for Mr. Ping, to whom Scorpion revealed her true intentions, much to Mr. Ping's disbelief.

Using the training from "dizzy kung fu", Po fought off Scorpion and withstood the poison's power, and he defeated her. Indignantly, Mr. Ping broke up with Scorpion, and he next day Po helped him cook and give out antidote soup to the victims of the poison. Po pointed out to his father that he was getting attention from some lady admires, which seemed to please Mr. Ping. 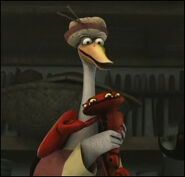 Mr. Ping and Scorpion hug in front of Po

Po has a nightmare about Scorpion devouring his dad

Scorpion gloats about her plan to an unconscious Shifu
Add a file to this gallery
View more...

Retrieved from "https://kungfupanda.fandom.com/wiki/Love_Stings?oldid=101759"
Community content is available under CC-BY-SA unless otherwise noted.