Emissary (in the episode credits), Faithful Emissary, His Eminance (by Shifu and other inferiors)[1]

Personal emissary to the Emperor (formerly)

Meng Tao (credited as Emissary in the episode credits) is a character from the Nickelodeon television series Kung Fu Panda: Legends of Awesomeness. He was the personal emissary to the Emperor, assigned in the episode "Royal Pain" to bring the Emperor's grandson Lu Kang to Shifu for training.[1]

In "Royal Pain", Meng Tao accompanied Lu Kang to the kung fu camp which Shifu and his students were currently counseling. After warning the masters of Lu Kang's clumsiness, Meng Tao left the emperor's grandson to his training, and returned some time later to find that he had made little to no progress. When Po, the Dragon Warrior and master in charge of Lu Kang's training, rashly makes a vow to fully train Lu Kang, Meng Tao informs him that breaking that vow would result in beheading for every master of the Jade Palace, before leaving the horrified masters to continue with training. Unknown to all, Meng Tao actually wanted Lu Kang to fail, as failure would bring great disgrace to the emperor, forcing him to give Meng Tao the throne.

While Meng Tao was absent, Po came up with the idea to pass off a simple bean pod as a magical artefact that would increase Lu Kang's skills, giving Lu Kang the confidence to improve in his training. After several days of training, Meng Tao again returned to check on Lu Kang's progress, and was shocked when he discovered that Lu Kang was now a skilled martial artist. Realizing that he now had a serious problem, Meng Tao departed, pretending that he was leaving to inform the emperor of the "good news". In actuality, he headed straight to Chorh-Gom Prison to seek out Hundun, a prisoner and enemy of Po's. Visiting Hundun in his cell, Meng Tao promised Hundun freedom in exchange for assisting him in making sure that Lu Kang did not live to complete his training.

With that, Meng Tao and Hundun returned to the Valley of Peace and confronted Lu Kang and Po while they were alone at the Pool of Sacred Tears. While Hundun incapacitated Po, Meng Tao drew a pair of blades and attempted to murder Lu Kang, in the process squashing Lu Kang's bean pod. At first, Lu Kang fell into despair, but when Po revealed that the bean pod was not magical and that Lu Kang had in fact done all his skills himself, Lu Kang regained the confidence to utilize the unorthodox techniques he had developed while training to ultimately defeat both Meng Tao and Hundun in combat.

After the battle, Meng Tao was presumably imprisoned for his treachery.

Outwardly, Meng Tao appeared to be a stern yet loyal servant of the Emperor. In reality he greatly desired to be free of servitude. He plotted to take the throne for himself, and was willing to go to any lengths to get it, including enlisted a known criminal's help in murdering a member of the royal family.[1]

It is unknown if Meng Tao possesses any kung fu skills, but he was seen wielding dual swords in combat.[1]

So far he liked being a personal and loyal servant to the emperor but found and interest to assassinate lu Kang so he can be emperor. Right after the emperor found out meng Tao had help to assassinate his grandson. He was fired and arrested.[1]

He was pretending to be a sitter for lu Kang so far but hated him secretly. He wanted lu Kang assassinated so he can take the throne for himself.[1]

Meng Tao made a deal with Hundun to help assassinate lu Kang in exchange for the rhino's freedom.[1]

He wears a yellow robe and a yellow hat.[1] 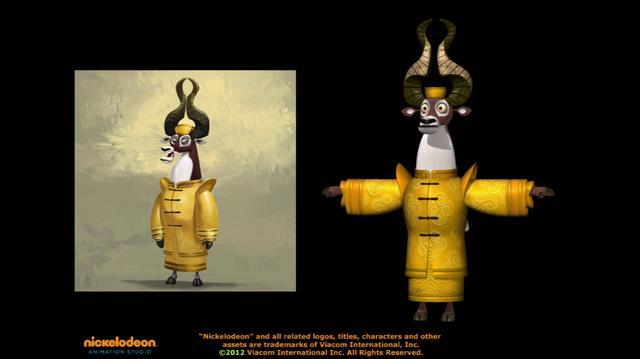 Retrieved from "https://kungfupanda.fandom.com/wiki/Meng_Tao?oldid=104218"
Community content is available under CC-BY-SA unless otherwise noted.