Master of the Garnet Palace

Master Mugan is a character from the Nickelodeon television series, Kung Fu Panda: Legends of Awesomeness. She is a very strict kung fu master who currently resides as head master at the Garnet Palace. She appeared in the episode "A Tigress Tale" where she requested an additional Kung Fu master to train at the Garnet Palace.

Upon arrival, Mistress Mugan watched as Tigress demonstrated her abilities in kung fu, and stated that Tigress was a powerful warrior. When Tigress went to acknowledge the compliment, Mugan stated that it was not a compliment. She informed Tigress that her focus in kung fu was precision, and demonstrated so by jumping out of her fish tank and using the bowls around her kung fu dojo to jump and eventually cut Tigress with one of her razor sharp fins. Tigress was impressed and her training began. But despite Tigress' best efforts, she could not impress Mugan. Finally, after hearing Wu Yong's story and his tale of how he got where he was, Tigress wished to return to the Jade Palace. But Mugan barred her in her room, stating that Tigress was hers and belonged to her, as all the previous warriors who trained under her did, and that she would break Tigress.

When Po showed up at the Garnet Palace, Mugan informed him that Tigress did not want to see him. Po broke into the Palace and freed Tigress, but when they tried to escape they were stopped by Mugan. Tigress then informed Mugan that there was more to life than kung fu. An outraged Mugan then attacked Tigress and Po, but was defeated when Po and Wu Yong knocked all the pillars holding her water over, with Tigress trapping her in the central tank. She remained there after Po and Tigress left.

Mugan views her students as her possessions that are meant to be broken, and as such does not share a close bond with any of them, unlike Shifu. She is very haughty and arrogant, and views herself to be a better master than she probably is.

Mugan utilizes mainly precision in her combat style, which helps her fight well with fighters with more strength and power. She is also able to propel herself out of water and use her razor-sharp fins to cut her enemies.

Wu Yong was the previous warrior who trained under Mistress Mugan. For years, he devoted himself to the art of Kung Fu and meeting Mistress Mugan's expectations in her idea of precision and perfection. One day, Wu Yong's body finally gave out under the years of training he had received under Mistress Mugan, and was demoted to being a servant in the Garnet Palace.

Mugan views Tigress, like all the previous warriors under her tutelage, as a possession and someone whose body and spirit needs to be broken. She had treated her very poorly and never acknowledged Tigress to be the warrior she is.

Mugan considers Po to not be a true warrior, as he was chosen to be the Dragon Warrior by more of an act of fate than the result of years of training and discipline. Therefore, she had treated Po with scorn, and said that Po was not worthy to be considered in joining her at the Garnet Palace.

Mugan looks down on Shifu and treats him with the same arrogance she does the others around her. Despite this, however, Shifu views her as a revered master of kung fu. 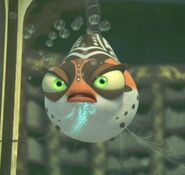 Mugan and Tigress traveling to the Garnet Palace 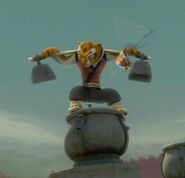 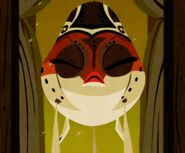 “Honestly, how do you put up with him?”
—Mugan to Shifu, A Tigress Tale