The shop in Kung Fu Panda

Dragon Warrior Noodles & Tofu (commonly known as Mr. Ping's Noodle Shop or simply the noodle shop) is a popular noodle restaurant in the Valley of Peace. It is a business run by Po's family, currently by his father Mr. Ping. The business is protected with a "secret ingredient" in the soup, to which no one knows except Po and his family. The shop was previously called the Golden Harvest Noodle Restaurant,[1] but after the events of the first film, Mr. Ping changed its name in honor of his son Po.[2]

The dining area is made up small tables for people to eat. A circular archway serves as the entrance, which was partially destroyed during Po's battle with Tai Lung when he sent him flying into it with one punch.[3] The repairs on the archway can be seen in Kung Fu Panda 2.

The kitchen is very conventional. It has a stove, as well as wooden tables and shelves that take up most of the walls. The ceiling is high enough for an animal like Mr. Ping, but a larger animal like Po would need to lean over a little.

There are two bedrooms above the kitchen. Po's room is small compared to his size and is heavily decorated with posters and action figures of the Furious Five, as well as stacks of noodle bowls.[3]

Mr. Ping's room is slightly more moderate compared to Po's, his walls decorated with modern Chinese paintings and his shelves with diversely colored pots and boxes.[4]

Mr. Ping noted in Kung Fu Panda that the noodle shop has been in the Ping family for at least four generations. He illustrated this by showing Po the portraits hanging on the side wall of the kitchen of his father, his grandfather, and finally his grandfather's friend who owned the shop before Mr. Ping's grandfather won it from him in a game of mahjong.[3]

Mr. Ping, being the current owner of the noodle shop, took a lot of pride in his success and hoped to one day that Po would take over the family business. However, as the events in the original movie illustrated, Po clearly had no interest in making noodles for the rest of his life and instead, through a term of events, took up learning kung fu.

The noodle shop also holds up a tradition of serving "holiday-themed" noodle soup to the villagers during the Winter Feast, in which Po and Mr. Ping spend all day cooking the special soup together, as well as hang up decorations around the shop. Both Po and Mr. Ping look forward to the feast every year, resulting in successfully holding up the tradition as seen in Kung Fu Panda Holiday.

"The Art of Balance"

One day, Po woke up from a disturbing dream to find his face in a rabbit customer's noodle bowl. Initially appearing angered, the customer instead insisted on keeping the bowl as a Dragon Warrior souvenir (though he asked for another bowl because of hair in the other one). After this, Po confessed to Mr. Ping that he was feeling worn out due to his two responsibilities at the noodle shop as well as his duty as the Dragon Warrior, which was why he fell asleep at work.

That night, Po returned to the restaurant, and was dismayed to see the large number of customers there. His imminent workload was soon relieved by the arrival of an antelope named Kuo, a skilled vegetable chopper who is apparently a huge fan of Mr. Ping's. To prove his worth to the noodle shop, Kuo presented his skill to Mr. Ping, who was impressed but refused to give up his secret recipes when Kuo asked. While walking away, Mr. Ping did not notice Kuo glaring at his back.

The next day at dusk, Mr. Ping caught Kuo searching for the recipes in his kitchen, and refused to give up their location when Kuo made his demand. Angered, Kuo drew a knife on Mr. Ping, and Po returned to the restaurant to find his father held hostage. Po attempted to reason with the deranged antelope, but Kuo threw his knifes at Po in a fit of rage. Po used his inner balance to step on the knife in mid-air and defeat Kuo. Po untied his father while Shifu stopped Kuo from escaping. After being alerted by his master, Po ran off to help the Five deal with a crisis at the crescent bridge while Mr. Ping began to clean up the noodle shop, planning to make some changes to the place in the process.

One day, Mr. Ping was stricken with the goose flu, which not even his "Secret Ingredient Soup" could cure. Po was left to take care of the customers, and enlisted the help of the Furious Five in this task. However, the Five's attempts to run things using kung fu led to disaster until Mr. Ping arrived (his soup having taken longer than usual to take effect) and expertly put everything back in order.

In the episode "Master Ping", the noodle shop gets destroyed and Mr. Ping goes to stay with Po and the others at the Jade Palace.[5]

Some time after Po moved to the Jade Palace barracks, Mr. Ping had renamed his restaurant "Dragon Warrior Noodles & Tofu". He completely marketed out his son's success as the Dragon Warrior, fit with paintings of Po, and displaying the mop Po had used while working at the shop on the wall for the customers to adore, as well as making "Dragon Warrior size" dumplings.

When Po came to the noodle shop, the customers were treated by Mr. Ping to free tofu desserts (with purchases) in honor of his arrival. Later, Po was told the story of how he was adopted by Mr. Ping in the kitchen, and shortly after left on a journey to Gongmen City, having doubts about the goose being his true family. At the end of the film, Mr. Ping was seen tending to a pig mother and her son, the latter wanting to see the Dragon Warrior for his birthday. At that moment, Po returned, to both Mr. Ping's and the customers' delight, with two crates of radishes. After declaring that he was indeed Mr. Ping's son, Po headed into the kitchen with the goose, who insisted on cooking a meal.

Po returns to the shop after a disastrous first day teaching, and as he and Mr. Ping talk out back, they are told by a villager that someone is about to beat Po's dumpling eating record. They go back to the front of the store and see a large figure finishing off the last of several bowls of dumplings as the crowd cheers him on. The figure turns, revealing himself to be a panda, who himself as Li Shan and reveals that he is looking for his long-lost son. Despite obvious clues, the two fail to realize they're father and son, much to the exasperation of the shop's customers watching them in anticipation. It is only until the two turn away from each other and are about to walk away that it clicks and the two happily reunite.

The noodle shop is featured as a playable level, using the visual likeness of the Kung Fu Panda 3 version of the shop. 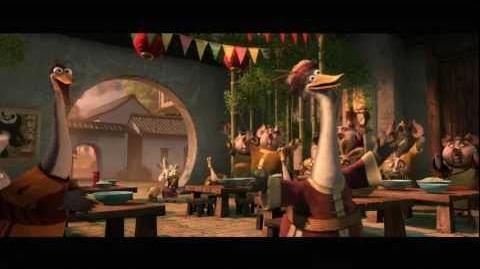 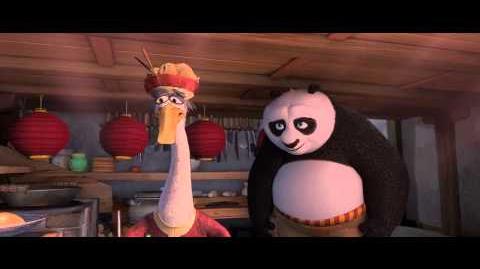 Where Did I Come From - KFP2
Po and Mr. Ping talking in the shop's kitchen 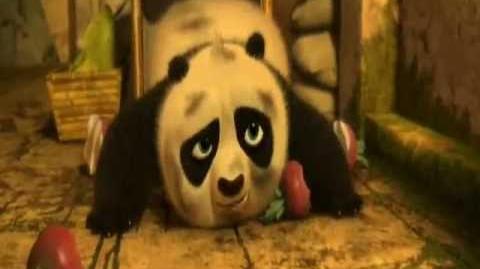 Kung Fu Panda 2 Baby Po
Mr. Ping sharing the story of how he found Po outside the shop 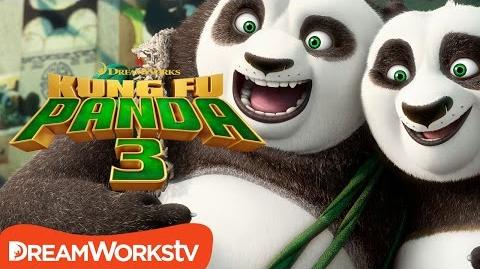 Retrieved from "https://kungfupanda.fandom.com/wiki/Noodle_shop?oldid=98622"
Community content is available under CC-BY-SA unless otherwise noted.