Panda Paws (also called Panda Paws: A Mei Mei Mini Movie) is a Kung Fu Panda 3D animated short created by DreamWorks Animation. It features the two characters Mei Mei and Bao from Kung Fu Panda 3. Originally serving as a prologue to the film, it was instead released as a bonus feature for its DVD, Blu-ray, and Digital HD releases. The digital copy released on May 13, 2016, and the disc copies on June 28, 2016.[1]

Mei Mei narrates to what led to some unflattering moments, recollecting her audition for the Spring Festival. Her performance had been interrupted by Bao, whose cuteness automatically won favor with one of the judges. After Bao provoked a challenge, the two both attempted to steal the show, Mei Mei with her ribbon-dancing and "butterfly" performance, and Bao with his liuqin-playing balancing act. This chaos eventually led to a fire, which lit up some fireworks nearby, which then launched them both into the sky.

Despite their panic, Mei Mei caught Bao and they landed safely with the curtain serving as a parachute. The backstage fell away, revealing other panda villagers. Receiving cheers from the audience, Mei Mei and Bao ended with a good-natured "panda paws" pose together.

On March 8, 2015, a movie reviewer reported seeing the short at an early screening of Home.[2] 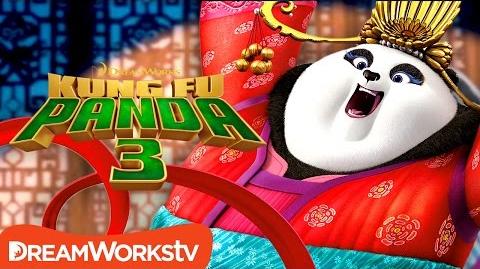