The villagers gathered at the bridge (Kung Fu Panda 3)

Keep the village protected from outsiders

The panda villagers refers to the giant pandas that currently reside in Panda Village, discovered by Po after he reunited with his birth father Li in Kung Fu Panda 3. It consists of members from the surviving massacred pandas, the later generation of the ancient pandas, and younger pandas (mainly children) who were likely born in the group. Apart from Li, it is unknown which pandas originally belonged with which group.

Some of the panda villagers were briefly seen at the end of the film, when Li received a "message from the universe" (later revealed to be Oogway)[1] about his lost son surviving the massacre on the older panda village. The villagers took notice of his surprise, and they all stopped their farming tasks and looked up to him.

Their fighting style was none other than their old self. Po trained them by their own talents. Like the young pandas, who have the talent to kick a shuttlecock in their game of Ti Jianzi then he leveled them up to use dumplings then firecrackers. Then he trained the pandas (the one who likes to sleep in hammocks) to launch themselves and getting them to the best hard work. The hugger, Big Fun trained him to hug the Jade Zombies by using a medium-sized log and a gigantic rock. He also trained Mei Mei to use her ribbon dancing skills with a dangerous weapon, a nunchaku.[1]

But when Po was almost turned into a jade statue (the first stage of reanimation) in the Spirit Realm, Li Shan already been taught to use Chi by the Jade Scroll and taught the others how to use Chi, freeing Po from the reanimation.[1] 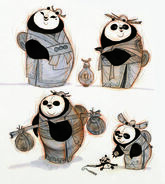 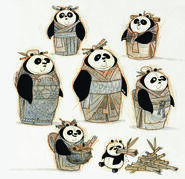 Concept art of the villagers by Chris Brock

Concept art of the villagers by Max Boas

Retrieved from "https://kungfupanda.fandom.com/wiki/Panda_villagers?oldid=112511"
Community content is available under CC-BY-SA unless otherwise noted.