Pang Bing is a character from the Nickelodeon television series Kung Fu Panda: Legends of Awesomeness. She appears in the two-part episode "Emperor's Rule".

Centuries ago, Pang Bing was part of a peaceful group of mystics who wished to share their magic with all of China in order to promote peace. However, the common people of the time feared their powers, and when Pang Bing and her colleagues appealed to the Emperor of the time for protection, he had them imprisoned. Pang Bing alone managed to escape while the rest of her group apparently perished, and swore revenge on all of China. She spent centuries perfecting dark magical arts that apparently enabled her to live far longer than should have been possible, all in preparation for her eventual conquest of China.

Using her powers of mind control, Pang Bing-posing as an old, decrepit servant-attached herself to the imperial court as a retainer of Duke Zhihui, who-along with several guards-was actually under her control. After the most recent Emperor retired and passed the throne to his grandson Lu Kang, Pang Bing saw the chance to at last exact her revenge and take over China. Lu proved immune to her powers due to his simple mind, but this worked in her favor as she intended to sacrifice him during an eclipse in order to increase her powers and seize control of the minds of all of China's citizens. She would also use her disguise to earn the trust of Po, the Dragon Warrior, whom Lu chose as the new head of Imperial security.

After Po overheard Pang Bing's pawns planning to eliminate Lu, the pair fled, unaware that Pang Bing's forces would beat them back to the Jade Palace in order to neutralize the threat of Shifu and the Furious Five. After tricking Po into revealing where Lu was hiding, Pang Bing revealed her true nature and explained her history and intent to conquer China. She then captured Shifu and the Furious Five while Po and Lu escaped, and traveled to the capital in preparation for the ritual that would allow her to control all of China. Pang Bing also quashed an attempt by the Kung fu masters to escape, and soon enslaved them as well.

Po and Lu eventually returned with some unlikely allies: a band of enemies known as the Brotherhood of Malfeasance whom they had released from Chorh-Gom Prison in order to fight against Pang Bing. After Po was defeated, Pang Bing offered the villains the chance to escape, which they took, unaware that they would not be able to escape the range of Pang Bing's spell. She then cast a spell on Po, unaware that she had inadvertently helped him discover the secret to resisting her control. As such, he was able to disrupt the ceremony in which she attempted to exert control of all of China with some help from the Brotherhood, who returned to aid him.

Despite this unexpected resistance, Pang Bing succeeded in taking control of the minds of everyone in China but Lu and Po, and soon set her sights on controlling the panda as well. She eventually succeeded, but not before Po was able to launch an attack that subsequently disrupted the ritual and freed all of Pang Bing's victims. Her powers diminished and her schemes thwarted, Pang Bing was taken away to prison.

A figure resembling Pang Bing is recalled by Po in "Daze of Thunder" when Qing tries to convince him to join Qing's quest to isolate the Valley of Peace.

She has a very arrogant and selfish personality, stemming from the actions of the past people of China against her. She only wants power for herself, and doesn't care that the current inhabitants of China are not responsible for the crimes of their forebears.

She has the ability to zap her opponents with mystical energy blasts. She can also cast spells to control the minds of others, though this can be thwarted – at least temporarily – if one focuses on a single thought while she is attempting to control them or, as in Lu's case, is only capable of concentrating on one thought at a time.

Pang Bing never liked Lu Kang. She wants to overthrow him and take over the world with her mind but she is unable to control his mind because it's too weak. So she prefers him as a beacon for her plans and also a slave.

She wears a white robe with a red sash. 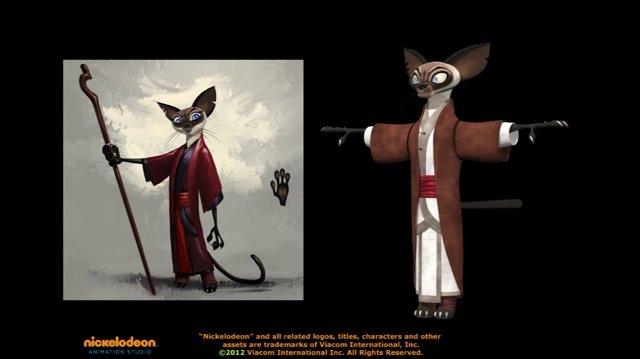 Retrieved from "https://kungfupanda.fandom.com/wiki/Pang_Bing?oldid=101957"
Community content is available under CC-BY-SA unless otherwise noted.