This wiki contains *SPOILERS* for Kung Fu Panda: The Dragon Knight. Please browse at your own risk. [Learn more...]

View source
watch 01:40
The Sandman Will Keep You Awake - The Loop
Do you like this video?
Play Sound

Po and Oogway underneath the tree in Kung Fu Panda

Living
Disintegrated (in Legends of Awesomeness)[1]

The Sacred Peach Tree of Heavenly Wisdom is a revered peach tree that sits on top of Peach Tree Hill. It's at least a thousand years old. A sapling from the tree accompanies the tree on top of the hill.

The peach holds a special significance for Oogway—it is a symbol of longevity and renewal. Its wood is said to ward off evil and its petals are said to have magical properties.[2] He carved his staff from the wood of this tree and sprinkled a handful of petals in the Moon Pool in the Jade Palace every morning. Oogway called the tree that grew from the seed the Peach Tree of Heavenly Wisdom. It is a sacred place for him, the place he comes to meditate and to be one with the universe.[3][4]

Oogway journeyed from his home in the Galápagos Islands as a young tortoise almost a thousand years ago. He traveled the world, visiting every country until his feet led him finally to China. When he stood on the little hill that overlooks what would become known as the Valley of Peace, he knew that he had found the place he would call home for the rest of his life. To commemorate the moment, Oogway planted the seed of a peach, his favorite tree, on the hill.[3][4]

Contrary to this tale, however, is one told in the episode "Enter the Dragon" from Kung Fu Panda: Legends of Awesomeness. According to Ke-Pa (the narrator of the tale in the episode), the peach tree overlooked the Valley for hundreds of years prior to Oogway's arrival. During that time, the Valley was left in a state of torment as demons from the underworld ruled over the land. Oogway fought these demons with his Hero's Chi and had them locked away at the top of Jade Mountain (where the Jade Palace would later be built upon as protection). One demon, Ke-Pa, was stronger and smarter than the rest and fought Oogway while he was weak. As Ke-Pa was about to defeat Oogway, the peach tree used the "powers of heaven and earth" to restore Oogway's chi, providing him with the strength to defeat Ke-Pa and trap him in the mortal body of a pig. And as long as the peach tree lives, Ke-Pa remains trapped.

In Secrets of the Scroll

Po sulked after feeling upset over the rejection and disapproval of Shifu and the Furious Five by eating peaches from the tree. Oogway understood his impulse to eat when he's upset, but was concerned about the lack of faith Po showed in himself. He then used a saying to encourage him to forget about the past, don't worry about the future, and to instead live for today. He then allowed Po to eat another peach by hitting the trunk and causing one to fall into his hand.

Later, Oogway was seen practicing his tai chi underneath the peach tree, which at the time was beginning to lose its peach blossoms, when Shifu informed him of Tai Lung's escape from prison. Oogway told Shifu that he must let go of the illusion of control and instead nurture and believe in Po's abilities in order for him to stop Tai Lung, demonstrating this metaphor by planting a peach seed that Shifu pulled from one of the peaches of the tree. Oogway then handed him his staff and ascended into the Heavens in a cloud of peach blossoms. After Oogway's death, the tree remained bare up until the end of the film, where it was seen sprouting new blossoms on its branches.

Also at the end of the film, it was shown that a second peach tree, planted by Oogway and Shifu during their last conversation, has sprouted and started to grow.

Both the elder peach tree and younger sapling make cameo appearances in the series, often showing Po eating a peach while he ponders his situations.

The peach tree makes a significant appearance in the episode "Ghost of Oogway". Po was sent to rake the blossoms up on Peach Tree Hill and Oogway's ghost (Junjie in disguise) appeared in a wave of peach blossoms. In the end, Oogway's real form appeared near the peach tree after watching Po, Shifu and the Five's fight against the leopards and Junjie.

The peach tree made another significant appearance in the episode "Enter the Dragon", which followed up on the tale narrated by Ke-Pa, the demon trapped in a mortal body by the tree's power. The tree started showing signs of its death, and in the process, Ke-Pa was gaining his powers back. Eventually the tree lost all of its petals and Ke-Pa transformed back into his dragon-like demon form. He attacked Po and Shifu (who were on the hill trying to prevent the tree's death) with his firebreath, torching the dead peach tree in the process.

Later in the episode, after Ke-Pa released his demon brothers by draining Po of his Hero's Chi, Tigress and Shifu brought Po to the tree in hopes that the tree will restore his strength and spare his life. But as Po placed his paw on the tree's trunk, the tree crumpled into ashes and blew away with a nearby breeze. As Po collapsed, he came into contact with the peach tree sapling, which (like the elder peach tree a thousand years previous) used the powers of heaven and earth to restore Po's life force and greatly enhance his Hero's Chi. Po used this strength to imprison the demons once more and defeat Ke-Pa.

The peach tree was once featured in the game , referring to it as an area by the name of Oogway's Peach Tree. It was also shown that the peach tree sapling seen at the end of Kung Fu Panda was no longer on Peach Tree Hill, but in Town Central instead.

Concept illustration of the Peach Tree by Tang Kheng Heng

Po eating the peaches from the tree while oogway comes 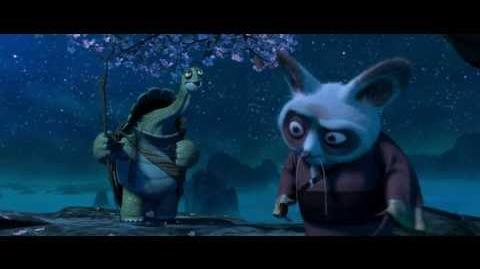