Mole-like black spot on the fur on her left cheek.

Po's mother is a giant panda and the biological mother of Po. She was killed during the massacre of her home village by Lord Shen and his wolves.[2][1] Her only appearance has been in the memories and dreams of Po in Kung Fu Panda 2 and Kung Fu Panda 3. Her name is currently unknown.

Over twenty years prior to the events of the film, Po's mother lived with her husband Li in a farming village of pandas, where they raised their infant son happily. Their happiness, however, was forever destroyed by Shen and his army of wolves, who attacked the village, bent on annihilating all of the pandas in hopes of averting his fate of being defeated by one of them. Li fought them off to protect his family, telling her to take their son and escape, which she did.

She ran through the woods, holding her baby close, but as the wolves gained on her, she realized that they'd eventually catch her. Managing to temporarily elude them, she found a lone boat carrying a crate of vegetables. Seeing a chance to save her one and only child, she hid Po in the crate. However, Po began crying for his mother, and so she embraced her son one last time. After that tearful and heartbreaking moment of farewell, she then left her son, hoping for the best. Running back to the woods, she led Shen and the wolves away from him, presumably losing her life in the process off-screen.

It wasn't until over twenty years later that an image of his mother was awakened from Po's memory during a battle with one of Lord Shen's wolves, who wore the peacock's symbol. The sight of this symbol caused recurring dreams and visions for Po, who was troubled by them and eagerly sought answers about his past. In the end, however, he was able to find out the truth about his mother's sacrifice for him and achieved inner peace, not letting a horrific past and the deaths of his parents determine who he was.

Her sacrifice is mentioned by Li, where her last moments are briefly seen once again in flashback form, in which Shen and his soldiers pursue her.

Po's mother seemed to have a warm, caring nature, and appeared smiling while living her peaceful life with her family in the panda village. During the attack on their home, she acted swiftly and took her cub, fleeing without question as her husband held off the invading wolves. She showed an undeniable maternal love for Po when she eventually chose to leave him in a crate of radishes for safekeeping, willfully catching the attention of the wolves to follow her alone and ultimately sacrificing her life to save his.[1].

In Kung Fu Panda 3, Li described her as the "total package": being smart, beautiful, and having a tremendous appetite.

Po's mother appeared happy standing at the side of her husband in Po's final vision. When the village raid began, Li defended her and their child, telling her to take their son and run away as he held them off, and, trusting him, she did so. It marked the last time Po's mother was seen with her husband.[1]

In Kung Fu Panda 3, Li is said to have been looking for Po to fulfill the last wish of his wife before she died.[2]

In Po's first memory in Kung Fu Panda 2, Po's mother was seen abandoning him, which caused Po to begin questioning his past. A nightmare later followed showing Po's mother and father disregarding Po as their son, having replaced him with a radish.

However, in Po's final vision, he saw his mother happily living with him and his father in their village. After the attack on their land, she escaped, carrying Po with her while desperately trying to protect her baby from the invading wolves. Deciding to hide him in a crate of radishes, Po's mother was near-to- tears as she lovingly parted from her son, after which she drew the wolves away to come after her, willfully giving up her life to save her son.

Though remembering this saddened Po in adulthood, he later came to accept it and found inner peace over his unfortunate past.[1]

In Kung Fu Panda 3, it is said that the last dying wish of Po's mother was for her husband to find their son.[2]

Po's mother wore a simple light brown dress and a striped belt around her waist that resembled Po's.[1] 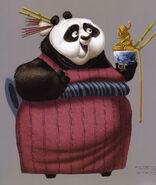 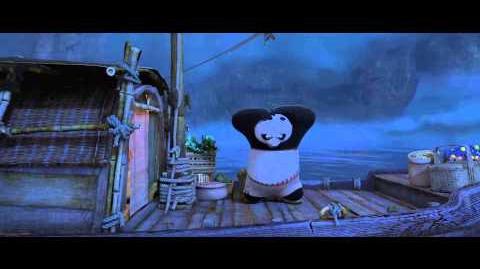 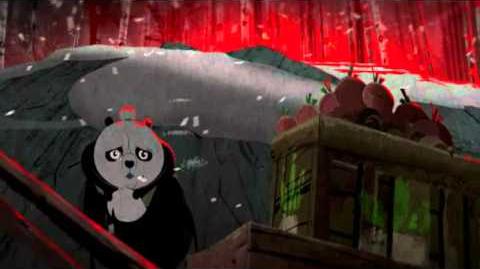 Po's Past - KFP2
Po recalling his past and his parents in Kung Fu Panda 2
View more...