"Po Fans Out" is the eighteenth episode from season one of Kung Fu Panda: Legends of Awesomeness.

In order to impress his fan club, Po releases a supernatural creature so he can vanquish it in battle – which doesn't exactly go his way.[1]

Po attempts to solve the Hero's dilemma, only to learn that the Furious Five have easily passed the test in the past. He then complains about their fame, particularly the fact that they have fan clubs, only to learn that he has one of his own. In his rush to meet them, he tears into the Hall of Warriors and nearly knocks over a jar containing the Mongolian Fist Demon. After Shifu warns him about the ancient threat-whose pedestal Po was supposed to build a fence around-he also helps Po face his dilemma, which requires that he cease struggling. Po then arrives at the Dragon's Den and meets the Panda Pals: Lam, Chen, and Yang, and quickly becomes caught up in their admiration.

Eager to please his fans, Po approaches Monkey for a donated artifact, only for his fellow master to notice that he's "collected" several other artifacts—and Mantis—to be presented to the trio. Po then takes them on a tour of the village, showing them the sights of his famous battles, only to find the kids desperate to see him in battle against an enemy. However, after multiple instances in which he is unable to perform for them, he takes them back to the Dragon's Den. He departs but then returns to recover a forgotten item, only to overhear the three expressing their disappointment in him as their hero. Po then shares his unhappiness with Monkey, who reminds him that many of the most famous masters acted merely as peacekeepers.

Unfortunately, with the lack of a present enemy to face, Po considers releasing the Mongolian Fist Demon and defeat it for the benefit of his fans. He rethinks the plan but then accidentally unleashes the beast by breaking the jar; though the demon proves small in size, it quickly makes a pest of itself. Unfortunately, Po's efforts to contain it result in the beast growing in size, and it soon leaves the Jade Palace and is set loose on the village. The Furious Five leap into action to stop the demon, but it continues to increase in size and soon overpowers them. Po then faces the demon, battling it at the behest of his fan club only to find it gaining size and power.

Eventually, Po realizes that blows directed against the creature cause it to grow, and realizes that he must avoid striking it in order to cause it to shrink. The children, failing to comprehend this tactic, see his actions as cowardice, but Po eventually realizes that the safety of the valley is more important than his own popularity. He is eventually able to weaken the demon back to its original size, and reimprisons it after Shifu arrives with the repaired jar. Po then approaches his fans, and then delivers to them the jar containing the beaten demon while also impressing on them that there is more to heroism than fighting. Unfortunately, Po ends up breaking the jar and freeing the demon-again-while showing off inside the Dragon's Den. 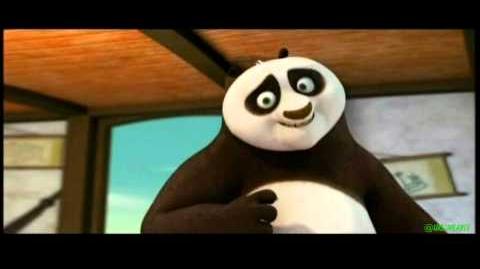 “Did you just get bigger, or did my eyes get smaller?”
—Po

Retrieved from "https://kungfupanda.fandom.com/wiki/Po_Fans_Out?oldid=100396"
Community content is available under CC-BY-SA unless otherwise noted.