Seen from above, resembling the Yin-Yang

The birth of kung fu

The Pool of Sacred Tears is a pool of water located on top of a tall peak in the Valley of Peace. It is noted by Shifu to be the place where Oogway unraveled the mysteries of harmony and focus, and was later known to be the birthplace of kung fu.[1]

"Legend tells of Master Oogway walking amongst the bamboo forest on a journey of discovery. At the top of a lonely peak, Oogway discovers a pool. Moved by the beauty of nature and the plight of the oppressed, Oogway stared at his reflection and wept into the pool. As he meditated, he felt the universe in motion around him. He could hear a butterfly's wing beat. He could see light in the darkest cave. By focusing on the mysteries of the natural world, Oogway achieved harmony and focus. This insight formed the basis of a self-defense system of kung fu."[2]

In an interview with "Po" for Scholastic News Online, Po shares the story of this famed pool in a slightly different way (presumably because of the effects of oral tradition):

"It all began with Master Oogway, who came to China from the Galapagos Islands. He saw that the soft and weak were preyed on by the hard and strong. He meditated on their plight for 1,000 days and wept as he did so. He wept enough tears to form a small lake. At the end of that time, Oogway had formed the basis of a self-defense system. He spent the next 10,000 days refining the system, working out every day by the lake. His system became the martial art part of kung fu, and the lake is called the Pool of Heavenly Tears, in his honor."[3]

Master Shifu took Po to this prestigious place after he discovered Po's potential to learn kung fu. But as soon as they got there, Po, unaware of their location at the moment, thought Shifu dragged him there to bathe. Exhausted from the long hike up to the peak, he obliged by washing his armpits in the sacred waters. Master Shifu calmly reminded him not to do so, and Po stopped immediately when he mentioned their location. It was here that Shifu declared himself Po's master, to which the panda teared up with joy.

For the next few days (presumably), Shifu trained Po, using food as a motivational tool. They switched locations occasionally, one of them being at the pool again. Through this training system, Po was able to improve both his skills and his physical abilities.

The Pool of Sacred Tears was a notable location in the game. 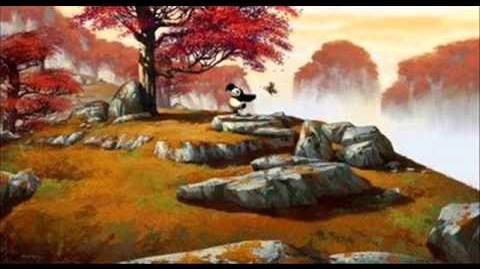 Retrieved from "https://kungfupanda.fandom.com/wiki/Pool_of_Sacred_Tears?oldid=104282"
Community content is available under CC-BY-SA unless otherwise noted.