Return of the Four Constellations

"Return of the Four Constellations" is the tenth episode from season one of Kung Fu Panda: The Paws of Destiny.[1]

The kids go to the Spirit Realm and meet the Original Four Constellations in the hopes of learning how to defeat Jindiao.[1]

Po and the Four Constellations find Jindiao gone from the site of his previous defeat; Bunnidharma reveals that this is fortunate, as he is unaware of how to use the Spirit Urn. He then explains that only the original Constellations know the secret, and that the children will have to enter the Spirit Realm and ask them. Back at the Temple of the Heavenward Plumblossom, Jindiao awakens and berates Jade Tusk for failing to capture the panda children. He then reveals that he is familiar with Bunnidharma, and becomes determined to hunt him down.

Back in Bunnidharma's cave, the rabbit leads the pandas in a ritual to enable them to enter the Spirit Realm. Jade Tusk, meanwhile, goes to interrogate Laoshu, having determined that she must have given Bunnidharma the herbs that have allowed him to survive so many centuries. She then returns to Jindiao, who is feeding on the chi of the Flying Pika Monks, with word of Bunnidharma's whereabouts. In the Spirit Realm, the children arrive on a tranquil island where they encounter the original constellations: Blue Dragon, White Tiger, Red Phoenix, and Black Tortoise. Po, however, finds himself at the Inn of the Never Ending Dumpling with Yaoguai, who ended up there following his defeat.

The first Constellations prove to be underwhelmed by their successors, but reveal that they used Bunnidharma to bring the children before them. They then challenge the children to a contest to test their worthiness; if the children pass, they will learn how to use the Spirit Urn. Po reluctantly approaches Yaoguai, who proves to be surprisingly friendly and longing for the Underworld while cursing Jindiao. Back in the mortal realm, Jindiao's forces search for Bunnidharma's cave, only to invade the dwelling of an innocent family of rabbits by mistake.

To their surprise, the children find that the contest proposed by their predecessors is a game of cuju; unfortunately, the elder Constellations prove to be formidable players. However, the children decide to fight back using their Hero's Chi, and are doing well until Bao disqualifies them by touching the ball with his hand. The Constellations then issue a mental test to give them a second chance, and their riddle to determine that the Wellspring is hidden in the Panda Village Peach Statue. The Wellspring is the only power that can imprison Jindiao in the Spirit Urn, and the Constellations-through their moves during the cuju game-have shown their successors how to open it.

The Constellations send the children back to the Mortal Realm, and Po is also sent home after befriending Yaoguai. Unfortunately, upon arriving back in Bunnidharma's cave, the five and Bunnidharma run into the arriving Jindiao and his minions. 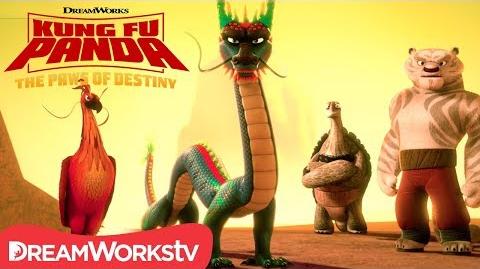 Retrieved from "https://kungfupanda.fandom.com/wiki/Return_of_the_Four_Constellations?oldid=110328"
Community content is available under CC-BY-SA unless otherwise noted.