"See No Weevil" is the twenty-fifth episode from season three of Kung Fu Panda: Legends of Awesomeness.

When Po discovers that Gen. Tsin's conspiracy theory about invading alien rice weevils is true, he must stop the invaders from taking over the world.[1]

Po encounters General Tsin again, and hears him claiming that an invasion of Alien rice weevils is threatening all of China, something that neither he nor the other Kung fu masters take seriously due to Tsin's history of imbalance. However, after receiving a bag of rice from a pair of goats both claiming to be named Hong-a trait Tsin claims all the weevils share-he starts to suspect Tsin may be right. Upon taking the bag to the Jade Palace, he finds Shifu and the Five readying Tsin's old freezing machine for use on the general himself, and takes off to investigate the situation. Returning to the rice mill, he encounters the goats, and discovers that Tsin is correct: the weevils have taken over their minds. Unfortunately, the weevils succeed in subduing him, and the bag he has taken to the Jade Palace contains other weevils that set their sights on Shifu and the Five.

Despite nearly being infested, Po manages to escape using Tsin's tips, only to find that Shifu and the Five are under the weevils' control; faking a similar possession, he manages to free Tsin. Tsin attempts to eliminate him, thinking him truly under the weevils' control, but is eventually persuaded of Po's freedom, which allows the two to escape. They then make their way to Mr. Ping's Noodle shop in search of copper woks-one of the few protections against the weevils-only for a weevil to infest Tsin, who joins an army of infested villagers and the Furious Five and Shifu. They attempt to shove Po into Tsin's machine, but using his father's woks Po is able to free the Five and Tsin, and with Mr. Ping's help they capture the weevils and use the freezing chamber on them. Tsin, claiming that being infested has cured him of his madness, bids farewell to Po and the others as they take custody of the weevils-and leaves by inexplicably taking flight. 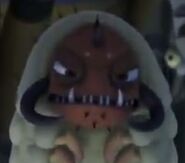 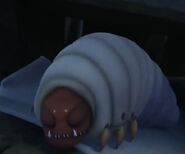 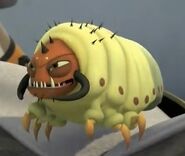 Retrieved from "https://kungfupanda.fandom.com/wiki/See_No_Weevil?oldid=110527"
Community content is available under CC-BY-SA unless otherwise noted.