Support infantry in battles against opponents or buildings

Shen and his wolf and gorilla armies

Shen's cannon was a powerful weapon devised by Shen himself to make kung fu inefficient and conquer all of China. Many of these cannons were made, but were eventually destroyed by the efforts of Po, the Furious Five, Shifu, Storming Ox, and Croc.

Po had developed a special kung fu technique that proved to be a powerful defense to the weapon, allowing the practitioner to destroy cannons with their own fired ammunition. Furthermore, Po also showed that the weapon isn't suited to attacking a small evasive target, meaning anyone sufficiently mobile can maneuver around the weapon to attack its wielders. The result of these discoveries means that while the weapon is devastating in sieges against structures, kung fu is still a valuable skill of war against an enemy armed with them.

The main cannon, after being severely damaged, ended up collapsing on Shen, who was crushed and killed on impact.[1]

Shen's cannons bear the appearance of various fearsome animals, such as crocodiles. Shen's personal cannon, the largest one, has the appearance of a dragon. When a cannon is fired, a plume of smoke spurts out, shaped like peacock's wings, and a cannonball shoots out in fiery red sparks, exploding on impact.

Each cannon is slightly larger than a full size gorilla, with the largest being three times as big.

Over twenty years before the events of Kung Fu Panda 2, Shen developed a disturbing interest in the destructive potential of the gunpowder used in the manufacture of fireworks. Concerned, his parents consulted a Soothsayer who made a prophecy that led Shen to lead his wolves in attacking a nearby panda village in order to wipe them out. After being exiled by his parents for this crime, Shen and his army retreated to a hideout deep in the mountains, where Shen spent years designing and manufacturing his greatest weapon, eventually producing his very first cannon.

The wolves eventually ran out of metal for use in making the weapon, so Shen ordered Boss Wolf and a gang of soldiers to raid the farthest villages for more metal. While Boss Wolf set out on this task, Shen returned to Gongmen City with his cannon contained in a large box, where he confronted the Master's Council, who had been given control of the city after Shen's parents' deaths. After defeating Masters Storming Ox and Croc and getting defeated in turn by the more powerful Thundering Rhino, Shen unveiled his cannon and killed Rhino with one blast. After forcing Ox and Croc to surrender, Shen took control of the city. With his new enormous supply of metal and gunpowder, Shen proceeded to use the Fireworks Factory to manufacture dozens of cannons, while placing the original cannon in the atrium at the very top of the Tower of Sacred Flame. Once he had amassed enough cannons, Shen made plans to set out on his conquest of China in three days.

However, Po and the Furious Five soon learned of Thundering Rhino's death, and set out to Gongmen City in order to stop Shen and destroy his weapon. They were eventually captured and brought to the top of the tower, where Shen ordered his soldiers to aim the original cannon at the warriors. Fortunately, Po had managed to sneak Mantis into the tower undetected, and the small warrior foiled Boss Wolf's attempts to light the fuse before knocking the lighter out of his grasp, while Viper succeeded in picking the lock on Tigress's cuffs. After freeing the rest of the warriors, Tigress and Mantis worked together in smashing the cannon through the floor, where it tumbled down the inside of the tower and smashed to pieces on the floor.

However, Shen managed to escape after Po was distracted by a vision of his past, and flew to the fireworks factory in the distance. Once he landed, Shen ordered his soldiers to fire his other cannons directly at the tower, aiming to bring it down with Po and the Five inside. They managed to escape, however, and an infuriated Shen ordered his soldiers to prepare the ships and the cannons to begin his conquest earlier than planned.

The Five later infiltrated the factory, where they saw for themselves just how many cannons Shen had created. Realizing that China would fall should the cannons leave the building, the Five decided to destroy the factory by pushing a cart full of powder kegs inside. Their plan was foiled when Po also infiltrated the factory (despite Tigress's order to stay in Gongmen Jail) in order to confront Shen himself, and the Five were forced to douse the kegs to prevent Po from getting killed in the explosion. During their fight, Shen managed to lure Po in front of his largest cannon, which upon fired sent Po flying out of the factory to his apparent death.

The next night, Shen set out with his armada through the city's canals to begin his conquest, with the recaptured Five in tow to be executed by cannonfire upon reaching the bay. In the process, Shen had a bridge which crossed the canal destroyed, almost killing innocent citizens and horrifying the Five. Po then returned miraculously alive. Initially surprised and infuriated, Shen had his wolves take aim, but they were unable to keep up with Po's constant evasive maneuvers. Po eventually landed on the boats, where the wolves panicked as they nearly fired at each other. After Po freed the Five, a tremendous battle ensued, in which Ox, Croc and Shifu also joined, and the canal was eventually blocked just before the harbor, preventing the armada from progressing. Shen eventually lost patience and ordered for his own cannon to be fired at the blockage. After killing Boss Wolf when he refused to do the deed, Shen fired the cannon at the masters, blasting them and the remains of dozens of ships into the harbor.

With everyone but himself too badly weakened to continue fighting, Po climbed onto an overturned boat for one last confrontation with the armada. Shen had his warriors fire on the panda, but then everyone present received a huge shock when Po used his newly required inner peace to redirect the cannonball, something that would have been considered impossible. Though astonished, Shen refused to give in and had his soldiers fire repeatedly upon the panda, but Po redirected every single cannonball, eventually aiming them towards Shen's own ships, destroying his armada completely.

After the assault, a disoriented Shen found himself lying beneath his largest cannon, which was damaged beyond repair and held up only by several ropes. Po confronted Shen and urged him to let go of the past, but Shen refused and made one last attempt to kill the panda. In his assault, Shen failed to notice that he was slicing through the ropes holding up the cannon until it was too late. While Po leaped to safety, Shen accepted his fate and was killed upon impact. The cannon's fall combined with the gunpowder on board destroyed the ship completely.

The cannons were seen still in use by the Gongmen City police force.[2] 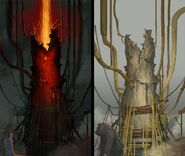 Concept artwork of the final battle by Mike Yamada 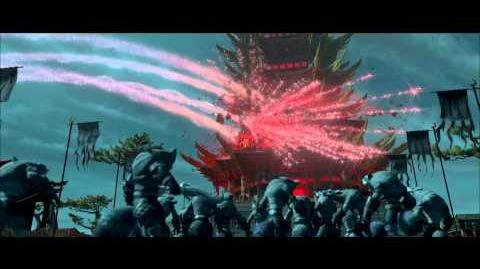