A camp near the Canyon of the Shrieking Wind (formerly)

Leader of the Ladies of the Shade

Ladies of the Shade

"Ladies of the Shade"

Lauren Tom[1]
Song is a character in the Nickelodeon television series Kung Fu Panda: Legends of Awesomeness. She is one of the members of the Ladies of the Shade, a traveling band of thieves. She made her first appearance in the episode "Ladies of the Shade", where she was assigned by the thief leader, Su, to get Po to invite her and the others to the Jade Palace, where they plan to craftily steal the Dragon Chalice. Song accomplished this, but she also had developed a close relationship with Po, which helped her eventually make the decision to turn against her leader and aid the panda.[2]

She traveled along with her group of four dancers and tried to get Po to invite her to the Jade Palace. She is very lady-like in dropping her handkerchief; however, Po doesn't notice this. When they get back to the other ladies, Su finally asks if they can stay at the Jade Palace, where they perform for the Furious Five and steal Master Shifu's Dragon Chalice given to him by Master Oogway.

When Po infiltrates the camp to retake the chalice, he is outnumbered when Song comes to his aid. After Su is defeated, Song takes her place as leader of the Ladies of the Shade, hoping to put them on the good path.

Like her comrades, deceit and thievery was Song's game. Described as an adorable lotus flower, she is usually assigned to put her good looks to use with seduction and infiltration among people. She also possesses a snarky sense of humor, quoting at one point that earning Po's trust would be easy as long as she wouldn't have to carry him.

However, she gradually develops from this, as she spends a day with Po, partaking in several activities and actually having a great time. While her feminine charms don't really work against Po (who remains mostly naïve and oblivious of them), some of his kindness and antics rub onto Song. She later feels reluctance and regret over fooling him.

Later, when Po, Viper, and Crane infiltrate her village, she takes a stand and joins their cause in bringing the Dragon Chalice out of there, and so redeems herself. Now determined to take up the leadership of the Ladies of the Shade and turn their profession to something more honest, she parts with Po, promising that she'll never forget him.[2]

Like her fellow leopards in the Ladies of the Shade, Song utilizes her parasol while in combat.[2]

Song seems to show strong feelings of affection towards Po. While initially meant to trick him with her female charms, she was unsuccessful given Po's naive and somewhat poor manners.

However, she grew to be amused by this side of him and had a very good time with him — so good, in fact, that she was on her way to confess to him, had not Su dropped in. She later felt guilty and regretted to have fooled him, but redeemed herself by joining his side and bringing the chalice out of her village. As she parted with Po to take up the leadership of the Ladies of the Shade, she gave him a kiss on the cheek, wishing him the best.[2]

Before Po, the Ladies of the Shade were Song's only friends.

Song seemed to side with Su on many things, not speaking her mind on any of them. She seemed to even fear Su because of her rash and brutal personality. At the end of the episode, however, Song decided to turn against her team and be on Po's side to redeem herself.[2]

Song wears a red vest with thin black trimmings, sweatpants, and sandals just like Su (except her vest is dark blue), but in difference, Song's vest has a large single pattern on the vest instead of a double-looped pattern like Su.

Song and Po referencing Lady and the Tramp 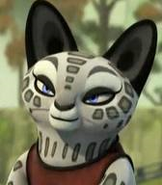 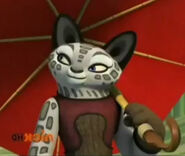 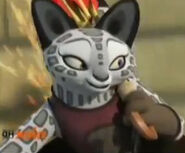 Retrieved from "https://kungfupanda.fandom.com/wiki/Song?oldid=111026"
Community content is available under CC-BY-SA unless otherwise noted.