This article is about the episode. For the location, see Secret Museum of Kung Fu.

The Secret Museum of Kung Fu

"The Secret Museum of Kung Fu" is the twentieth episode from season two of Kung Fu Panda: Legends of Awesomeness.

With Po and the Furious Five at each other's throats, Shifu takes them all on a disastrous road trip.[1]

Shifu shares with Po and the Furious Five the story of the Secret Museum of Kung Fu, and reveals that he has purchased the map and key to unlocking it. Despite the objections of Tigress, Shifu insists on taking his students to see it without attracting attention, unaware that a mysterious wolf has been eavesdropping. Borrowing Mr. Ping's Noodle Mobile, the group sets out, but tensions between the group quickly become evident as the masters become irritated by each other. As ire increases, the group is unaware that they are being observed by the wolf from before and his comrades.

The wolves-identified as the Lin Kuei-ambush the masters, and apparently succeed in capturing the map and key. The Furious Five quickly display their irritation and desire to return home, but Po convinces them to continue on for Shifu's sake. Shifu displays little concern for the theft; as it turns out, the map they took was blank, and the Lin Kuei resolve to follow the masters in hopes of them leading them to the museum. The masters continue their journey, but their irritation with each other finally reaches the breaking point just before the Noodle Mobile rolls onto a incline and falls off a cliff.

Having been thrown from the vehicle, the masters express their dissatisfaction, and Shifu reveals that he deceived the group about their journey, hoping that the experience would help them bond. With no idea of where the museum actually lies-and now no confidence in his students' ability to come closer together-Shifu departs, and despite Po's efforts the rest of the group does likewise. Shifu unexpectedly comes across a trail of clues leading to the museum's location, only to be tracked there by the Lin Kuei and captured. The wolves soon ambush his students due to their being distracted by their exasperation with their teammates, and all seven are then taken to the museum and imprisoned.

Finding the Phantom Crystal, the Lin Kuei's leader eagerly sets out to use it's power to rob and then destroy the Valley of Peace, taking Shifu with him while leaving the other masters trapped inside. However, Po manages to escape his restraints and rally the others, who are able to break out of the museum and pursue the Lin Kuei. Having regained their sense of unity, the masters succeed in defeating the Lin Kuei, with Po managing to steal back the Phantom Crystal and using it to escape a seemingly fatal strike from the leader. Recovering the battered Noodle Mobile, the group returns home grateful for the experience of their trip while agreeing never to do anything like it again.

The Great Masters placing their treasures in the Secret Museum 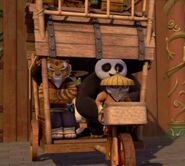 Po, the Five and Shifu about to leave

Po pulling a ribbon out of Tigress' ear

Po and the gang return home with a broken noodle cart
Add a file to this gallery
View more...

Retrieved from "https://kungfupanda.fandom.com/wiki/The_Secret_Museum_of_Kung_Fu?oldid=101068"
Community content is available under CC-BY-SA unless otherwise noted.