The Thread of Hope in Kung Fu Panda

Infinite Bridge (in development),[1] The Cliff/Rope Bridge (in Showdown of Legendary Legends)

The Thread of Hope (originally known as the Infinite Bridge[2]) is the name given to the thousand mile-long rope bridge that spans the chasm in the Mountain Pass.[1] It was on this bridge that the Furious Five confronted and battled Tai Lung in Kung Fu Panda.

The length of the first bridge section is 629 feet, with exactly 370 planks placed across it.[2]

The Thread of Hope ... was built seven hundred years ago by the grateful Chih Kuan Crane Clan from Mongol Daguur in Mongolia to repay Master Oogway for his help in defeating the Black Steel Flying Lizards from the Cliffs of Anguish at the Battle of Burning Sky at the Hour of the Rat.

It was Master Oogway's request that every animal in China should have the chance to come and live in the Valley of Peace, if they so wanted and their hearts were pure. The Thread of Hope was a means for determined, brave souls to escape the Northern Wastelands and make for a better life in the valley.

... the Thread of Hope also ensures that no army can invade the Valley of Peace, since it has been constructed to only permit single-file traffic and any threat would be spotted miles away by the ever-vigilant scouts from the Chih Kuan Crane Clan. The bridge has been designed to be quickly and easily destroyed if a threat is detected by cutting the supporting ropes at any of the many anchor points built atop the stony spires that thrust up through the mist of the Devil's Mouth. These spires are called the Fangs of Hell. The threat of being plunged into the screaming void has deterred any attacks on the valley since the bridge was built.[1]

The Furious Five encounter and battle Tai Lung on the part of the bridge connecting to the entrance to the Valley of Peace. Due to Tai Lung's vigorous fighting techniques and the Furious Five's desperate attempt to make sure he doesn't cross into the Valley, the first section of the bridge is completely destroyed and unusable. After sending Tai Lung down into the mist, the Furious Five believe they have won. However, Tai Lung quickly swings back up and compliments them, saying that Shifu taught them well, but did not teach them everything as he paralyzes most of them with his nerve attack, allowing Crane to carry his comrades back to the Jade Palace.

The Thread of Hope is featured as a playable level called the Cliff/Rope Bridge. The bridge is significantly smaller in size compared to its original film counterpart. 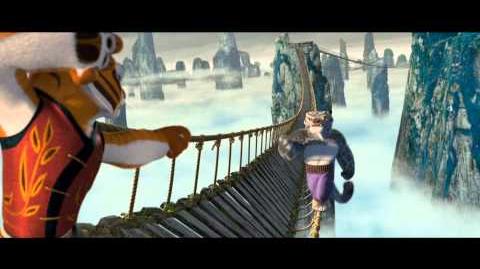 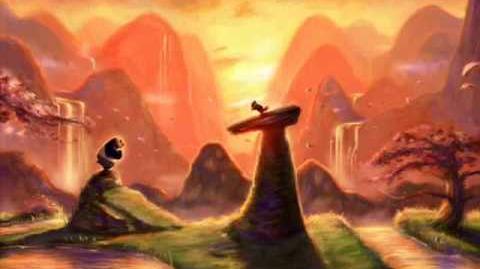 Retrieved from "https://kungfupanda.fandom.com/wiki/Thread_of_Hope?oldid=103590"
Community content is available under CC-BY-SA unless otherwise noted.