Fung and the Croc Bandits

Tong Fo is a character in the Nickelodeon television series Kung Fu Panda: Legends of Awesomeness. He is a notorious criminal who sought to break out of Chorh-Gom Prison and reclaim the war hammer he stole and hid away years ago. His first appearance was in "Jailhouse Panda", in which Po's undercover mission helped Tong Fo escape and recover the hammer.

Tong Fo was known for once wielding the Sacred War Hammer of Lei Lang and causing great widespread destruction throughout China with it. He was imprisoned and eventually put into Chorh-Gom Prison, but before taken, he made a replica of the hammer and hid the real one in Camelback Mountain, keeping its whereabouts a secret, with the fake copy eventually finding its way into the Jade Palace.

In "Jailhouse Panda", Po met Tong Fo in prison while he was in disguise as the criminal goat Sheng. As Sheng, Po tried to get information from Tong Fo about the location of the real Sacred War Hammer of Lei Lang, and attempted to get into his good graces and become his partner. At first glance, Tong Fo was quick to discern the lack of subtlety, finesse, and cunning from him, but then came to trust "Sheng". He admired his craft in seeming to be exceptionally good at lying after he was told he was really the Dragon Warrior in disguise (believing this to be a lie). He shared the secret that the hammer was hidden in Camelback Mountain, and that he was breaking out of jail, along with his minions, the Croc Bandits to claim the hammer.

But after he realized that "Sheng" had not been lying, as he witnessed him fighting off the Croc Bandits who had attacked him, Tong Fo saw he was indeed the Dragon Warrior, but was not angry or panicked at this. He quickly turned on Po and took his shift stone, using it to transform into a Chorh-Gom guard, and he locked Po in a cell with no way of turning back to his true form. With that, Tong Fo easily walked out of the prison and fled.

Tong Fo, still in disguise, eventually found Camelback Mountain, but he was confronted by Po, who attempted to stop him. Tigress and Monkey had arrived as well, and recognizing "Sheng" as an escaped criminal, attacked Po unknowingly, which gave Tong Fo time to fetch the hammer. He did so, but was engaged in a battle as the Croc Bandits arrived, and after Po's true identity was revealed to Tigress and Monkey. The war hammer slipped from one place to another, until Po delivered a kick to Tong Fo, preventing him from effectively using the weapon, and it fell into the grasp of one of the crocodile bandits. Tong Fo ordered the small crocodile to annihilate Po and the others, but was taken by surprise as the bandit was revealed to be Shifu using another shift stone.

With his plans failed and him beaten, Tong Fo was tied up with the Croc Bandits, and likely sent back to Chorh-Gom Prison, with the real war hammer returned to the Jade Palace.

Tong Fo also made an appearance in "Father Crime," alongside Fung and the Croc Bandits. Shirong had sold Tong Fo a jade statue that didn't exist in the first place. Tong Fo demanded repayment, and devised a plan with Shirong. He sent the Croc Bandits to "kidnap" Shirong and bring him back to Camelback Mountain. Once there, Tong Fo revealed his plan to lure Po into a trap and ransom the panda for the money Shirong owed to Tong Fo. But he also noted that if Po failed to show up, Shirong would be punished (specifically, used as a pillow).

When Shifu arrived to rescue his father instead of Po, he was knocked out and chained to a pillar. Tong Fo released Shirong, satisfied with his catch. Shirong questioned him about the ransom, to which Tong Fo revealed his plans to keep Shifu as a permanent prisoner. Shirong desperately tried to protest, but he ordered him to leave while he still could, threatening the elder red panda into submission. Later, when Po and Tigress came, Tong Fo fought Po one-on-one until he could subdue Po by tying a chain around Po's ankle and hanging him upside down from a beam.

Tong Fo almost finished Po off when Shirong returned, claiming that the rest of the Five had come. Tong Fo came to investigate, only to be tripped and thrown aside by Shirong. But he came back to fight again, jumping up to where Po was. Shirong freed Shifu and the two red pandas leaped into battle. Tong Fo managed to hold his own against them, but was knocked aside and onto a beam. Shifu and Shirong jumped after him, but Tong Fo noticed Shirong was on an unstable pillar. He pushed his own beam over and it swung towards Shirong. Shifu jumped and pushed Shirong aside, only to be hit instead. Tong Fo swung the beam back around and successfully pinned Shirong.

He was about to lay the final blow when Shirong asked him about the Lou Gu Mystery of the Disappearing Coin. Shirong performed the trick, but Tong Fo moved in. He stopped when Shirong tossed a sword from his sleeve, which Shifu caught and slammed against Tong Fo's head, knocking him out cold. He was then carried out by Fung as he and the Croc Bandits fled. It is unknown where they went next.

Tong Fo has been described as diabolical, violent, and evil, despite his misleading looks. He can be socially awkward at times, often pausing and emphasizing words that aren't usually emphasized, or staring at others with his enormous eyes for an uncomfortable amount of time. He can also be unpredictable, such as when he showed he was impressed with Po's less-than-convincing act as a criminal and his true identity rather than being angry, and when he threw a table aside after Po walked away, only to pleasantly tell him to hurry back for dessert. He is also conniving and ruthless, leaving Po to rot in jail as he planned ahead to retake the Sacred War Hammer of Lei Lang and use it to once again wreak destruction.[2] He is very intelligent and incredibly calm, and known to be a criminal mastermind.

Tong Fo is a skilled kung fu warrior who uses his speed and agility to enhance his techniques. Despite his small stature, he can outmaneuver his opponents and use his strong and swift attacks to gain an advantage over them. This has enabled him to hold his own against multiple attackers, such as Shifu and Shirong, the Furious Five, and larger opponents like Po and Tigress.

Tong Fo is also intelligent, claiming to be twice as smart as Po.[source?] His intelligence is matched by his strategy and tactics, as he plans things before going into action. His intellect also makes him a manipulative foe, turning allies against each other and making others do his bidding.

Fung and the Croc Bandits

Tong Fo seems to use the Croc Bandits as his lackeys, being the "brains of the outfit", and shows little patience for their unprofessional behavior while acting as their boss.

Tong Fo was first unimpressed by Po's lack of "subtlety, finesse, and cunning", and quickly sprung to attack him for being a "bad liar". He later came to admire him for what he thought was a gift for deception when Po told him the truth, which he thought was a lie. Tong Fo struck conversations with Po, his mannerisms and behavior making the disguised panda uncomfortable in some instances (such as when Tong Fo stared at him extremely close), but Po was able to earn his trust enough to get him to tell him the location of the Sacred War Hammer of Lei Lang. However, after Tong Fo discovered who Po was, he turned on him and left him in prison as he escaped, and the two later fought over the war hammer, with Po eventually defeating Tong Fo.[2]

Tong Fo first heard about Mr. Ping when he interrogated a lackey when he noticed that he did not hear from most of them. He is impressed with Mr. Ping's personality after the goose bravely stood up to him. After he tries his soup, he realizes that it that was the reason why his lackeys had switched sides. Realizing an opportunity to conquer China with his fear and Ping's soup, he offers him an alliance. However, he mistakenly calls Mr. Ping's business a "cruddy" place, which offends Mr. Ping.

After being defeated and locked up in Chor-Gom Prison again, Ping gives the soups to him and his lackeys. Tong Fo says the soup needs some more salt, which offends Mr. Ping who proceeds to beat him up with his soup pan.

Tong Fo takes to Peng and Lian's bad sides from the moment they meet, as he takes advantage of the couple's friendship with Po to end the latter once and for all. Tong Fo's henchmen take Lian hostage and threaten her life if Peng doesn't kill Po with a poison needle. Peng warns Po and furiously fights the crime boss with Po, thwarting yet another scheme.

Tong Fo has only been seen wearing blue sweatpants. 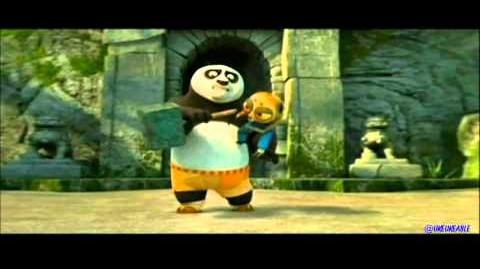 “My eyes aren't big! I have a small skull! My brain barely fits inside it!”
—Tong Fo to Po, Kung Fu Panda: Legends of Awesomeness

Retrieved from "https://kungfupanda.fandom.com/wiki/Tong_Fo?oldid=107968"
Community content is available under CC-BY-SA unless otherwise noted.