Unholy Dragon Returns to the Mountains

"Unholy Dragon Returns to the Mountains" is the eleventh episode from season one of Kung Fu Panda: The Paws of Destiny.[1]

Jindiao takes Po and the kids hostage in an attempt to locate the Wellspring.[1]

Zhizhu explains to the pandas that they were once the guardians of the Wellspring, but that their ancestors forgot their role after the first Four Constellations hid the Wellspring away. Back at Bunnidharma's cave, Jindiao and his minions have Po, his students, and Bunnidharma surrounded. He demands the Spirit Urn, but Bunnidharma and the pandas play keep away with it until Jindiao uses his power to freeze them in place. The urn is shattered, while back in the village Zhizhu tries to help the pandas reconnect with their warrior heritage. Li attempts to rally the other pands, reminding them of how they defeated Kai, and begins to unlock his powers.

Mr. Ping leaves the pandas to their work as he goes to find Po, who with his students has been restrained with cuffs that block their chi. Jindiao allows Bunnidharma to leave, no longer seeing him as a threat and wanting him to live with his failure, but the rabbit later intercepts a fatal blast aimed at Po. He then passes into the Spirit Realm, and instructs Po to lead Jindiao to the Temple of the Four Constellations. Po reveals that only the children know how to unlock the Wellspring, and that it is hidden in the Peach Statue. As the party sets out for the temple, Zhizhu instructs the pandas in an effort to help them regain their ancestors' powers, but the results are lackluster.

As they march, Po reveals that Bunnidharma swapped the Spirit Urn for a fake, while the real one is hidden in Po's backpack. As such, Po intends to trick Jindiao and use it against him in the temple. Ping, having spotted the captives, returns to Panda Village, and persuades a despondent Li to go to their aid despite the pandas' lack of progress in their training. They make their own way to the temple using Zhizhu's thread while the children prepare to unlock the Wellspring. The process unleashes a wave of chi that allows the arriving pandas to fully access their own chi power.

The young Constellations spring their trap, unleashing their own power and that of the Wellspring against Jindiao as Po reveals the real Spirit Urn. Jade Tusk and her troops attempt to interfere, but are engaged by the Panda Guardians, Mr. Ping, and Zhizhu. Po and his students seemingly succeed in trapping Bindiao in the urn, only to discover that they have trapped his vulture body and its original spirit instead. Jindiao himself then reappears, having regained his dragon body, while the children are petrified into statues. Li and the other guardians come to Po's aid, only to find that their enemy has apparently won. 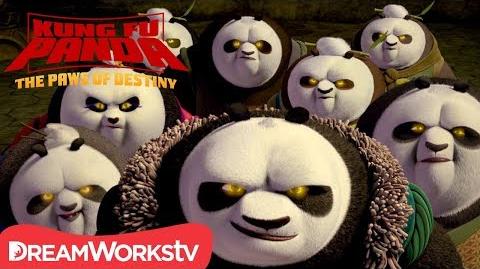 Retrieved from "https://kungfupanda.fandom.com/wiki/Unholy_Dragon_Returns_to_the_Mountains?oldid=111350"
Community content is available under CC-BY-SA unless otherwise noted.