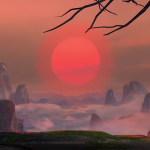 Hey there! I'm FlickeringFlames and welcome to my profile page!

A bit about me!

I'm a female student from Singapore and I'm a native speaker of English and Chinese. I'm technically Chinese race and heritage-wise, but nationality-wise, I was born and bred in Singapore. As such, I you have any questions regarding the cultural or linguistic aspect of the franchise, feel free to ask away. Do note that when conversing outside of articles I use British English and 简体字 Jian Ti Zi (Simplified Mndarin).

I do have quite some experience on Wikia. I am an admin on two Wiki sites but I decided to create this account specially for Kung Fu Panda. I'm not fond of using one account on more than 7 Wikis at once, since it floods my inbox and some users bring Wiki-baggage from community to community.

I also code quite quite a lot, a little thing I picked up during my experience Wiki editing. I eventually moved on from web design-based coding to basic functional, hard drive-based programming but I am thankful that Wikia had equipped me with the fundamentals of coding.

Firstly, I love KFP because of its loyalty to ancient Chinese culture. There will inevitably be differences, but I feel that the franchise really captures the richness of China. It spans from the breath-taking landscapes to simple details like how Shen's claws have metal hooks that clink on the ground, much like those female empresses use back then. There's so much detail and it's one of those films that you're completely detached from the fact that you're watching CGI anthropomorphic animals, instead, you're immersed in the universe.

Secondly, the graphics are absolutely stunning. The landscapes (gosh, the landscapes) are so beautiful. Most animated films don't pull off extensive martial arts or action scenes well either. And the films have this thing going on where they switch between 2D and 3D animations, giving it a really authentic shadow-puppet vibe at the start of KFP2. But other times, it's a really raw and sketchy comic montage style. Really refreshing.

I also really like the character development and theme. All the characters have a consistent vibe to them but it's not cliche or run-of-the mill. Speaking of characters, one of my all time favourite poems, 离骚 Li Sao (The Lament) by 楚辞 Chu Ci, which reminded me of a certain dark character in the film. Below is an excerpt from the poem, translated by a translation from Yang Hsien-yi and Gladys Yang. Enjoy.

I feel like this poem describes Tai Lung with remarkable accuracy. His is, afterall, feared because of his power and in everyone's eyes, he was a "prince" to Shifu. Thus, incarcerated for eternity, hence the imagery of a dark prison in the poem but he eventually breaks free of his "slumber".

Retrieved from "https://kungfupanda.fandom.com/wiki/User:FlickeringFlames?oldid=97801"
Community content is available under CC-BY-SA unless otherwise noted.