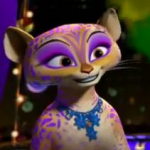 I'm a huge fan of Tigress and I want to learn more about her. Anyway, because I'm a huge fan of Kung Fu Panda (and I'm about to be a fan of Fraggle Rock because I finally saw it on the Hub! :) ), I decided to make a series of episodes where the characters of KFP and Azumanga Daioh discover Fraggle Rock and all their legends and traditions! Gobo tells the others to promise him not to tell anyone else about Fraggle Rock, no matter what they did to torture them (especially tickle torture, which Jeff Sutphen, the host of BrainSurge, attempts to do to Tigress and Monkey when they refuse to tell him after the first level. Both Tigress and Monkey got the lowest scores and their prize is to tell them where Fraggle Rock is, which they refuse because of their promise to Gobo!).

Okay, scratch that... I didn't think it would be decent enough to do a whole series of this... I might add it to a future episode of Azupanda Daioh, a video series that can be found on YouTube or Fanpop. Instead I have done another series called Haruhi Suzumiya's Master Po Club! I'm still working on the first episode so it'll take a while for it to premiere on YouTube

Master Wo Hop is sooooooooo cute! If he did exist (just because I have autism, it doesn't mean I don't know these characters don't really exist), I would marry him! I also made a character named Artica after an O.C. fox

from a FanFiction story. I sent her in to DreamWorks, but they said long hair is impossible to try on an albino tiger. She also has autism like me. This is why exagerates when Po sneezes and has the urge to either touch Tigress' whiskers or tickle her. Since O.C's are not allowed on this site, I have no choice but to add a link.

From now on if I have a dream about a certain character (be it an official character or a fan character), I'm gonna put it on this page! Remember, when I refer to myself, I refer to my Fu Sona, who is linked on top.

Monkey suddenly becomes a venquilitrist and performs at Las Vegas!

I accidentally got sucked up her nose! Yuck!

This is getting too weird! Lately I've been dreaming that Legends of Awsomeness would premeire on September 2nd, but also last night I dreamed thare was a sneek peek of it on YouTube where Tigress has a heart to heart talk to Mr. Ping about Po.

This ones pretty weird. For no reason, Tigress recites Mary, Mary, Quite Contrary to Po during a mission and Mantis then recites Twinkle Twinkle Little Star.

If you guys don't know what ashbors are, they're these white maggot like things that kill trees and in my dream they make Tigress squemish.

This involves Tigress' singing in The Princess and the Po, except this was an ice show...

Po accidently flies a tiny rocketship up Tigress' nose, and Monkey and Mantis are in the rocket! EEEEEWWWW!

A new version of Kung Fu Panda Holiday, part of the plot is the same, but Tigress envys Wo Hop for his skills. Meanwhile, Oogway appears in angel form and tells Shifu that peace can relax even the tensest thoughts.

This sounds weird, and a little gross, but Po was showing me that he could eat a live mouse, WHOLE! The rest is against the discussion policy as it is PG-13, so I'll conclude here.

Not only does Viper have a crush on Crane, but She suddenly reads the Bible. OMG!

Half the same thing as Scorpion's Sting, except Viper gets River Fever and we see the germs in her nose... Yuck! ;p

Po forces Shifu to go to Disney World with him for Father's day!

Shifu kisses Soothsayer and confesses his love for her!

Lord Shen is stuck on an island with the cast of VeggieTales and ends up singing Old Macdonald Had A Bible with them!

Mr. Ping secrety drinks out of the toilet!

Mr. Ping feeds Lord Shen spaghetti (Not the noodle soup). I guess it's because I saw the italian dub of Kung Fu Panda 2 on YouTube. Instead of noodles, Mr. Ping says spaghetti so that it made sense...

Po and the Furious Five wish me a happy birthday during the first day of chinese new year (Which is when my chinese zodiac, the dog, rules, which January 20th is a few days before) almost like in the episode Rhino's Revenge, this time, Tigress tempts me with a chocolate cake

The Kung Fu Panda franchise in general and Crossovers

Po receives a message from the emperor that Lord Shen is planning to use an unstoppable weapon to conquer China and it's up to him with the help of the Furious Five to stop him. I come in and tell the others that I got a windchime for my birthday! This reminds Po of something having to do with his past and he runs off and cries. Master Shifu meets him at the Sacred Peach Tree and shows him a place where he can cool off and releive his stress (The Dragon Cavern). Shifu tells Po that there are tons of waterfalls just like this everywhere, but only one has a special herloom that will unlock the strenth Po needs. The next morning, Po is relaxed and is ready to head for the Yangtze River, where Lord Shen's hideout is. Po tells the others the secret code for if anyone spots Lord Shen or Flying Fist :/, "Gecoritzbahongeratjakitokitonarigoralitzba" The others are confused and Tigress says, "Whoa, even I can't say that." The group was supposed to get across the Yangtze river by party yacht. Tigress ends up carrying nthe luggage to the bottom deck, and ends up tripping on Skunkman, who is tanning. (I know he never made it, but it's my dream) Tigress tells Po not to speak to him because he might be spying on them. Po disobeys her and finds out that Skunkman has been isolated on the yacht for 13 years since he panics so much thus making him raise stink. Meanwhile, The Furious Five try and search for anything suspicious. After a drunk passenger tells Viper to try some sake, Lord Shen, who is covered with a black cloak, appears out of nowhere. The five take notice, but as soon as he took the hood off his head, I woke up.

The Muppets and Po and the Five star in this shopping mall/comedy/chores/Disney circus thing... I think it's because I watched that Let's Go To The Circus Sing Along tape that night before sleeping and I was going to see The Muppets The next day!

Kind of like Sticky Situation, except it took place during the Chinese Moon Festival. Crane was punished for eating in the training hall earlier and has to train while everyone prepared for the Moon Festival. Somehow he manages to sneek cooking utensils in the hall for emergencies like this and decides to make moon cakes. As Crane is singing the Moon Cake Song, he doesn't pay attention and gets the sticky dough in the training machine causing the same incident in the original episode. Meanwhile, Donkey from the Shrek Franchise comes in and seeks Po's assistance, unbenosed to either that a bunny warrior (Schokesuke) is allergic to donkeys in addition to having tight-tied ears. Here's the embarrassing part, when Schokesuke does sneeze, Tigress says "gesundheit" before telling me to set the table. Crane panics and hires Alvin and the Chipmunks to clean the place, like Po did with Taotie. If you've seen the episode you know what I mean. Then Tigress comes along and tells Crane that he needs to train instead of "just stand there". Crane then starts flirting with her and tickling her. Suddenly the chipmunks burst out evil and destroy the Training Hall, then I woke up.

Joined the Wikia for the first time

My 1st year anniversary of my membership.

SpottedStar responded to one of SitcomLover's blogs with "I thought Tigress is ticklish." Never thought she'd think that!

Best birthday of my life thanks to Sparrow Of Blades blogging to remind everyone. Once again... thank you!

My 2nd year anniversary of my membership.

Retrieved from "https://kungfupanda.fandom.com/wiki/User:MasterArticaKennedy?oldid=49727"
Community content is available under CC-BY-SA unless otherwise noted.