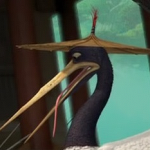 For transcripts. What's the difference between an ellipse (...) and a comma (,)? Should screams/laughs be in exact text? Is the mentioning of the camera changing directions necessary in a conversation scene? How exact does a setting have to be described? Should nonverbal actions from a character be a part of the same character's dialogue or be its own sentence? Should a joke in a scene be explained by the transcript guy? Can nonverbal actions be transcripted in the middle of a sentence? When to use quotation marks? Etc.

Were you openly asking about these? I noticed you put them on your profile page and not somewhere appropriate like a Message Wall or forum thread. I'll answer them anyway just in case.

While we're on the topic somewhat: there's still no manual of style for this wiki (mostly my fault), so I understand why you'd have so many grammatical and formatting questions. But hopefully looking at some of our past transcripts will help some. They're not super strict, though; because most of them are empty, we're just looking to get some content in it and do all the nit-picky formatting stuff later.
Anyway, back to your questions:

Think I hit them all. Thanks for being so curious about the workings of this wiki. Really need to get back to working on the manual of style - hopefully one day I'll have time for it. XD --§ρøττεδςταrღ (talk) 14:08, July 16, 2017 (UTC)

Note to self: Tiny down-left arrow symbols within text are trouble. Starter double apostrophes = row of text is italicized. Ender double apostrophes = does nothing. Maybe improve upon describing fight scenes and 2D narrations. Think about the necessity of indicating off-screens and nonverbal pauses. Fixing the Doc-to-Wiki Weirdness is not time-efficient. Putting out fast/rough transcripts more important. Let future people edit the imperfections - unless there's absolutely nothing left to improve on the entire wiki (doubt that time will come soon). Replace Temutai's soldiers/army with henchmen/clan maybe.
7/21/18 - Technically inactive, but I'm always lurking. Still waiting for the next KFP animation (short or a movie) to come out.
Flaws of my current KFP3 transcript: Inconsistency on the detail quality and the structural placement of nonverbals, names of the minor characters, and repetitive use of the word "in unison" and "jade pendant".
1/27/19 - Currently procrastinating on doing KFP transcripts b/c of video games n' other cool shows to watch.
9/5/19 - Less motivated to do KFP transcripts. Just realized that only watching an episode for the purpose of doing a transcript of it - is a sucky experience.

Retrieved from "https://kungfupanda.fandom.com/wiki/User:SixInchPo-gress?oldid=107850"
Community content is available under CC-BY-SA unless otherwise noted.