Digital painting of the Valley by Tang Kheng Heng

The Valley of Peace (also referred to simply as the Valley) is a large valley surrounded by a barrier of tall mountains that help protect the land from outside invaders (thus the included name of "peace"). It serves as the main setting of the Kung Fu Panda franchise and the home of many of the franchise's characters, including Po, Shifu, and the Furious Five. The Valley's other inhabitants consist primarily of rabbits, pigs, geese, and ducks, although sheep and goats have also been seen at times.

The Valley of Peace is an expansive mass of land located in China. The mountain-surrounded Valley hosts a varied landscape, ranging from sky-reaching mountain peaks to flat paddy fields. Rivers weave through the land, dividing it into several distinct villages, communities, and farming areas. Overlooking the Valley is the Jade Palace, a residence and training ground for kung fu masters and students that is accessible by a staircase that scales the cliff. Several villages scatter the Valley's floor, usually sporting small, similarly-constructed houses primarily made of stone and wood with metal roofs, built to accommodate the small sizes of most of the Valley's residents. It is mostly seen with its characteristic lush green plains and colorful trees, though snowfall does occur during the winter season.

The Valley of Peace was founded nearly a thousand years ago (prior to the events of the first film) by Master Oogway. After departing from his home in the Galápagos Islands, he went on a journey of discovery, traveling all around the world and visiting every country until he arrived in China. Oogway stood on a hill overlooking the Valley and knew that he had found the place he would call home for the rest of his life.[1]

The third chapter of Legend of the Legendary Warrior describes how Oogway later observed the "plight of the oppressed" and wept into what is now known as the Pool of Sacred Tears. Wanting to protect those that were considered "soft and weak" from the "hard and strong", Oogway formed the self-defense system of kung fu as a force for good. He worked many years to perfect this system and help make the Valley a safe haven and a peaceful place to live. He helped to form the thousand-mile-long bridge that guarantees safe passage into the Valley, and admitted students under his instruction in learning the art of kung fu. At this time, with the Valley and its inhabitants now well protected, it is presumed that the Valley had thus been named the Valley of Peace.

The Valley of Peace serves as the main setting for most of the movie's events — aside from those involving Tai Lung's escape from Chorh-Gom Prison, located in the snowy peaks of Mongolia. Tai Lung's defeat of the Furious Five at the Thread of Hope prompted the evacuation of the Valley, as the snow leopard was returning, putting the villagers in danger. The citizens soon returned to the Valley after they caught sight of the golden shock wave of the Wuxi Finger Hold from a distance. Though many buildings of the Valley had been damaged as a result, the villagers found Po, the newly-proclaimed Dragon Warrior, had defeated Tai Lung.

In Kung Fu Panda Holiday, the Valley was seen in the winter season, with snow filling much of the area. The villagers showed their Winter Festival custom of decorating their houses with colorful lanterns at night, which awed Po when he stopped to look at the view. The citizens also shared meals with friends and family on the holiday, and Mr. Ping mentioned the customs of dancing and playing games as well. The kung fu masters of the Jade Palace, however, tend to traditionally partake in the formal Winter Feast, though this tradition may have been altered since the events in Kung Fu Panda Holiday, where the masters joined in the village festivities.

The Valley is the main setting in the series, which follows Po in his various adventures protecting the land along with the Furious Five and Shifu. The Valley of Peace is threatened by numerous foes throughout the series, among them the Croc Bandits, Junjie, and Hundun. Festivities such as the Peace Jubilee and Dragon Warrior Day also take place during the series. There appears to be more goats among the Valley's population in Legends of Awesomeness as well, though it is unknown why, as they don't appear in the second film which takes place after the series.

The Artisan Village, an area of the Valley, was under attack from Shen's wolf army, which was pillaging the region for metal. Po and the Furious Five arrived, and courageously fought the wolves off. Though Wolf Boss and his warriors managed to escape, the villagers were saved thanks to their efforts.

The Cliffs of the Great Awakening 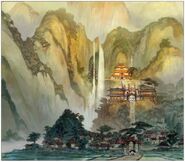 Concept art of the Valley

Concept art of the Valley's market

Po's village within the valley

The Valley of Peace as seen in Kung Fu Panda World
View more...