Village in the Heilongjiang Province

Wo Hop is a rabbit from the Heilongjiang province who succeeded in attaining the title of "Master" (or Chef) in the field of cooking. His first and only appearance so far has been in Kung Fu Panda Holiday.

Wo Hop first appeared at the Jade Palace for the food tasting tryouts in hopes to be hired as the official chef for the palace's formal Winter Feast dinner, which is done by being presented the Golden Ladle by the Dragon Warrior. Wo Hop was the first chef in line for the tryouts, but his prepared dish (a decorative carrot salad) was left untasted as Po unintentionally gave him the ancient "Hun-Shu Wave of Dismissal" and he was dragged away by palace attendants, believing to have brought great dishonor and shame upon himself and his village "for all of eternity", according to Zeng. Wo Hop was distraught and believed the only way to restore his honor was to fight the Dragon Warrior, even if it meant his own death.

Wo Hop later showed up in the kitchen to fight Po, but his "kung fu attacks" more or less had no effect on the panda. Po eventually trapped the persistent rabbit in a flour pot. Nevertheless, Wo Hop broke out and continued fighting throughout Po's cooking tasks, which did nothing else but lower Po's patience as he continued to do his task without fighting back. Eventually, Po became so overwhelmed that he went into a depression at the kitchen table, with Wo Hop by his side, lamenting that he'll be disappointing everyone. When Po began to doubt himself, Wo Hop commented that perhaps kung fu couldn't solve everything. This inspired Po to enlist the help of the Furious Five to finish the preparations. He requested Wo Hop's assistance in cooking for the Winter Feast in exchange for the consideration of his death. Wo Hop agreed, but because he still felt dishonored, Wo Hop tried to attempt an honorable death each time throughout the cooking tasks, which were all thwarted by Po.

Towards the end, after the Winter Feast at the Jade Palace had come and gone, Wo Hop still sought redemption of his honor. He arrived at the Feast being held at the noodle shop to fight Po once more, but instead, Po presented him with the Golden Ladle. Wo Hop happily accepted the prestigious cooking spoon, restoring honor to himself and his village. In the end, the rabbit chef was included in a portrait painting, along with Po, Mr. Ping, Master Shifu, and the Furious Five.

Wo Hop seems to hold honor to a rather extreme level. He was seen to be humble and polite when he first showed up at the Palace Arena to try out as chef for the Winter Feast at the Jade Palace, but after he was accidentally disgraced, the rabbit showed a stubborn streak as he tried again and again to regain his honor by fighting Po in what he knew were vain attempts, and even more drastic were his efforts to end his own life. Despite this over-the-top sense of honor and tradition, he did help Po to cook for the Winter Feast, and was pleased when rewarded with the Golden Ladle, which Wo Hop happily claimed restored his honor.

Though he lacks real combat skills, this did not stop Wo Hop from trying to attack Po by other means, such as biting and hitting him with spoons and woks, all which served to only annoy the panda.

Wo Hop took much responsibility for the reputation of his home village, which he claimed shared his honor when he competed to be head chef for the Jade Palace. When he was disgraced and dismissed with the "Hun Shu Wave of Dismissal", this brought shame to himself and his village, but when Wo Hop's honor was restored, so too was the name of his village.

Wo Hop was friendly upon meeting the Dragon Warrior, saying it was an honor to be considered as head chef for the Winter Feast at the Jade Palace. After Po accidentally rejected and disgraced Wo Hop, however, the rabbit later confronted Po and challenged him to a fight, saying it was the only way to restore his honor, even if it meant he would lose his life. Despite his several attempts to fight and his lack of listening to reason, Wo Hop did offer Po a bit of advice when the panda relayed his stress about guilt and his father, with Wo Hop telling him "Sometimes they love us too much".

Though his continued attacks were still a nuisance to the panda, Wo Hop also assisted Po in preparing for Winter Feast, albeit only since he was told his "death with honor" wouldn't be considered unless he did so. Later, Wo Hop tried to attack Po once again, only to be offered the Golden Ladle, which Wo Hop graciously accepted, his honor restored as he thanked Po for the gift.

Wo Hop is seen wearing a black silk robe that appears to have small red pepper designs on it. The robe has laced red and white-colored cuffs, and he wears a red sash around his waist. 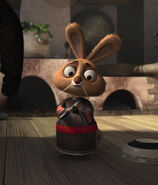 Wo Hop bowing to Po before fighting him

Wo Hop attacking Po with a wooden spoon

Wo Hop placing himself in front of Po's cleaver knife

Wo Hop with a kitchen knife

Wo Hop with Po, the Furious Five, Shifu, and Mr. Ping
View more...

“The Golden Ladle? Thank you, Dragon Warrior. Now I have restored my honor and the honor of my village!”
—Wo Hop to Po, Kung Fu Panda Holiday