The Sisters in Secrets of the Masters

The Wu Sisters are a trio of leopard sisters described by Po as "the most feared and notorious villains who ever terrorized China." They originally started out as early conceptual characters for Kung Fu Panda,[1] but instead appeared as henchmen-for-hire in the Kung Fu Panda video games, and later as the main antagonists in Secrets of the Masters.

In Secrets of the Masters

Po shared the story of the Wu Sisters after seeing the Sarcophagus of Su Wu in the collection at the Masters' Council exhibit. He explained how they were known as the greatest and most diabolical villains of their time, and that they had brought Masters Rhino, Ox and Croc together.

Long ago, the Wu Sisters were somehow captured and placed in separate prisons in order to eliminate any chance of them escaping. The leader of the sisters, Su Wu, was imprisoned inside a palace in the center of the city of Jinzhou, kept prisoner inside a container that came to be known as the Sarcophagus of Su Wu.

However, Wing and Wan Wu somehow managed to escape their respective prisons and worked together to infiltrate the Jinzhou Palace and free their third sister. Using their legendary Vortex Attack, the sisters defeated the palace guards and escaped to their volcano fortress. While gathered around a map table, Su Wu relayed to her sisters about a revelation she had during her imprisonment: if all of China's gangs stopped fighting and formed a criminal syndicate, they would have the power to take over the entire country. And so the sisters set their plan into motion by summoning all the gang leaders to their fortress for a meeting.

Two days later, the meeting was interrupted by the arrival of kung fu warriors Rhino, Ox and Croc, who intimidated the gang leaders into fleeing. The angered sisters proceeded to battle the warriors, who were easily beaten by the Wu Vortex. However, the warriors managed to turn the tables by separating the sisters, who were swiftly defeated and trapped beneath a large statue head.

The sisters were presumably returned to their respective prisons afterwards.

In Kung Fu Panda: The Game

Po ended up stumbling into their base camp when fleeing with the Dragon Scroll. When he runs into them and asks them for directions, they think he is spying on their camp and attack him. Po manages to defeat them and claims a map that will direct him back to the Jade Palace.

The Wu Sisters return and attack the players while Tai Lung targeted Master Crane. They ended up defeated by the players.

The Wu Sisters were once featured in the online virtual game as statues. If clicked upon, the statue would bring up a mini-game called "Legend of the Wu Sisters", where the player had to climb up treacherous buildings in order to collect enough keys to release and save one of the captured Wu Sisters from Tai Lung.

In "Divide and Conquer" the Wu Sisters infiltrate the Jade Palace and set out to shatter the friendship of its resident masters. To accomplish this, Su Wu dons the Many-Faced Mask of Mong-which they had previously stolen-and uses its magic abilities to impersonate several members of the Furious Five. The resulting disharmony allowed them to steal the Belt of Cosmic Cohesion, which had been entrusted to Shifu. However, Po succeeded in weakening the sisters' confidence in each other through his clever tongue and use of the Hundred Eye Orb, and defeated Su's sisters. Su then donned the mask once again and became Tigress, gaining her fighting skills as well as her appearance, but proved to be no match for the genuine article.

The Wu Sisters appear to be mischievous, taunting and sinister, acting as enemies who fought against Po and other kung fu heroes in the video games. In Kung Fu Panda: Legendary Warriors, they were servants of Tai Lung who obeyed his every word, calling him "master" as they aided him in his plans.

In Secrets of the Masters, they are presented as beholding great sibling loyalty, with their eldest sister, Su Wu, as their leader whose ambition is to conquer China by uniting the criminal gangs to form a criminal syndicate, and their ruthlessness knows no bounds as they vowed to conquer China "village by village". They also demonstrate effective teamwork, fighting as a single unit against their enemies.[2]

As displayed in the Kung Fu Panda video games, the Wu Sisters stick together and roll around to attack. Each sister wields a three-bladed wind-and-fire wheel.

In Secrets of the Masters, their fighting style is shown to be a signature, collaborative move of their own design. Claws unsheathed, they attach themselves at their tails and spin at a rapid pace, creating a swirling vortex that can crush, slice, and ultimately destroy any obstacle and disarm any opponent. This also displays their effective teamwork to act as a single unit, with a level of skill (described by Thundering Rhino) that "together they're more powerful than any kung fu master". Additionally, Storming Ox once stated they "took on the entire Jackal Nation armed with nothing more than a pair of chopsticks". However, Ox discovered that when they are detached from each other, they can be defeated more easily. This was the only known weakness to the Wu Sisters' attack; they are powerful together, but weaker when apart.[2]

The Wu Sisters seem like-minded and often act as one unit, tied together by sibling loyalty. They tend to stick together and help each other in battle. Wing and Wan are devoted to their eldest sister Su Wu, who acts as their leader, and she in turn is as loyal, and is angered when others hurt her younger sisters.

In their video game incarnations, the Wu Sisters were the subordinates of Tai Lung and were immensely loyal to their master.

As Po was the supposed Dragon Warrior and the Wu Sisters the subordinates of Tai Lung, they naturally were enemies. When Po accidentally wandered across their camp, the sisters immediately assumed that he was a spy and attacked, though fortunately Po was able to defeat them.

Though they didn't officially meet until they confronted each other in the Wu Sisters' fortress, Su Wu had already known of them, as she had observed their street-fighting from her cell.

Su mockingly assumed they were mercenaries for hire, and asked how much the Imperial Army was paying them, suggesting she'd give them a better offer, and stated that they do only work for money when Croc asked his friends why everyone assumed the same. They underestimated the three kung fu fighters, and were defeated.

The Wu Sisters wear ninja-like outfits, although Su does not wear a muffle or head covering, unlike her two sisters.

Concept illustrations of the Wu Sisters by Nico Marlet 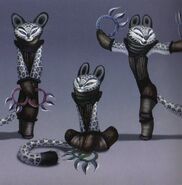 The Wu Sisters in Kung Fu Panda: The Game

Wanted poster from Secrets of the Masters