Not to be confused with Xiao Niao from Kung Fu Panda: Legends of Awesomeness.

"Journey to the East"

Lacey Chabert[2]
Empress Xiao (or simply Xiao) is a character featured in the second half of season one of Kung Fu Panda: The Paws of Destiny. Initially a princess, she has since taken her father's place as the current empress of China.

Xiao has a respectful and caring personality. She manages her responsibilities and keeps her wits. She seems to have a rude demeanor at times, particularly when she made mean-spirited comments towards Shi Long, but as she was not intentionally hateful, Xiao may instead simply be playful or naive.

Xiao sees the good in people she encounters, observed when she easily forgave those who had wronged her despite the severity of what had been done.

Xiao learned kung fu from Jade Tusk. She carries a jade dagger (a refashioning of her mentor's former prosthetic) attached to a chain as her weapon.

Xiao was born out of a miracle. As she was their only biological child, she became her parents' favorite. Shi Long subsequently had more time for herself, eventually meeting the White Bone Demon. After the emperor's death, Shi Long became Xiao's trusted advisor.

However, Shi Long refuses to let her sister die despite all of the hurt she has caused her. In the aftermath of the battle with the White Bone Demon, Shi Long is badly wounded and insists that she doesn't deserve to be saved. But Xiao insists that she cares for her, regardless of what she has done and asks Jing to heal her. Although she is still thrown in prison, Xiao states that they can take baby steps towards mending their relationship when she trusts her again.

Xiao takes interest in Fan Tong after first meeting the Four Constellations. They have an interesting conversation over a fancy dinner, and they instantly become friends. Xiao seems to like Fan Tong a little more than the other pandas and refers to him as her "best friend" throughout the series. She is absolutely devastated when it is believed that he, Po, and the Four Constellations are thought to be dead, but is overjoyed when they return. When Shi Long forces Xiao to give up her crown to protect her people, it is Fan Tong that talks her out of it. After she is rescued from the White Bone Demon, she even kisses him on the cheek.

Xiao wears a green gown with a purple trim and sash, trousers of the same color underneath, and a golden headdress with teal gems.

Xiao and her father 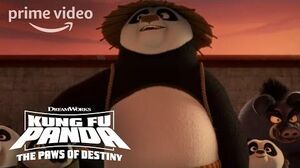 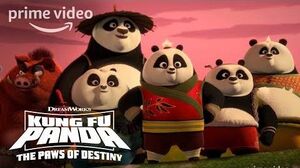